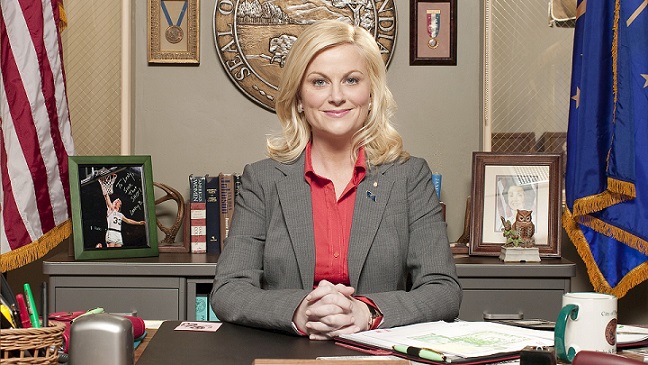 What would Leslie Knope do?

NOTE: This is reprinted from Yahoo!, where it originally appeared today, thanks to a former writer for NBC’s Parks and Recreation.

The following is a letter from Leslie Knope, who works for the U.S. Department of the Interior, Midwest Branch, in her hometown of Pawnee, Indiana. She believes that optimism defeats pessimism, and asks that if you have the means, you kindly make a donation to the ACLU, the International Rescue Committee, or the charity of your choice, to help the country and those most in need.

Amidst the confusion, and despair, and disbelief, it was suggested to me by a very close friend of mine (I won’t say her name, to protect her identity) (Ann. It was Ann) that perhaps a few people would enjoy hearing my thoughts on this election. So I sat down at my computer, cleared my head, and opened a document. Then I started crying. So I had some hot chocolate, and my close friend (Ann) rubbed my back for a while, and I got myself together, and sat down. And started crying. Then more Ann comforting me, and more hot chocolate, and back and forth like that for about six hours or so, the chain of hot-chocolate-and-back-rubs only interrupted briefly when I had to run to the store for more hot chocolate packets (“Just give me all of them, all the boxes,” I remember saying, through tears, to a very scared stockroom boy) and now I am ready to go.

When I was in fourth grade, my teacher Mrs. Kolphner taught us a social studies lesson. The seventeen students in our class were introduced to two fictional candidates: a smart if slightly bookish-looking cartoon tortoise named Greenie, and a cool-looking jaguar named Speedy. Rick Dissellio read a speech from Speedy, in which he promised that if elected he would end school early, have extra recess, and provide endless lunches of chocolate pizzandy. (A local Pawnee delicacy at the time — deep fried pizza where the crust was candy bars.) Then I read a speech from Greenie, who promised to go slow and steady, think about the problems of our school, and try her best to solve them in a way that would benefit the most people. Then Mrs. Kolphner had us vote on who should be Class President.

I think you know where this is going.

Except you don’t, because before we voted, Greg Laresque asked if he could nominate a third candidate, and Mrs. Kolphner said “Sure! The essence of democracy is that everyone—” and Greg cut her off and said “I nominate a T. rex named Dr. Farts who wears sunglasses and plays the saxophone, and his plan is to fart as much as possible and eat all the teachers,” and everyone laughed, and before Mrs. Kolphner could blink, Dr. Farts the T. rex had been elected President of Pawnee Elementary School in a 1984 Reagan-esque landslide, with my one vote for Greenie the Tortoise playing the role of “Minnesota.”

After class I was inconsolable. Once all the other kids left, Mrs. Kolphner came over and put her arm around me. She told me I had done a great job advocating for Greenie the Tortoise. Through tears I remember saying, “How good, exactly?” and she said “Very very good,” and I said, “Good enough to—?” and she sighed and went to her desk to get one of the silver stars she gave out to kids who did a good job on something, and as I tearfully added it to my Silver Star Diary she asked me what upset me the most.

“Greenie was the better candidate,” I said. “Greenie should have won.”

“I suppose that was the point of the lesson,” I said.

“Oh no,” she said. “The point of the lesson is: people are unpredictable, and democracy is insane.”

Winston Churchill once said, “Democracy is the worst form of government, except all those other forms that have been tried.” That is perhaps a pithier and better way to get my point across, than that long anecdote about Mrs. Kolphner. Should I just erase all of that and start with this? Whatever. I’m pot-committed now, and is there extra caffeine in that hot chocolate? Because my head feels like a spaceship. The point is: people making their own decisions is, on balance, better than an autocrat making decisions for them. It’s just that sometimes those decisions are bad, or self-defeating, or maddening, and a day where you get dressed up in your best victory pantsuit and spend an ungodly amount of money decorating your house with American flags and custom-made cardboard-cutouts of suffragettes in anticipation of a glass-ceiling-shattering historical milestone ends with you getting (metaphorically) eaten by a giant farting T. rex.

Like most people, I deal with tragedy by processing the five stages of grief: Denial, Anger, Bargaining, Depression, and Acceptance. My denial over the election results was intense. My anger was (in Ron’s words) “significant.” My bargaining was short, but creative — I offered my soul and the souls of all of my friends in exchange for 60,000 more votes in Milwaukee, to any demon who cared to accept. (Tom told me it was a terrible deal, but I didn’t care, in that moment.) My depression I have already mentioned. Which brings us to Acceptance.  And here’s what I stand on that:

I acknowledge that Donald Trump is the President. I understand, intellectually, that he won the election. But I do not accept that our country has descended into the hatred-swirled slop pile that he lives in. I reject out of hand the notion that we have thrown up our hands and succumbed to racism, xenophobia, misogyny, and crypto-fascism. I do not accept that. I reject that. I fight that. Today, and tomorrow, and every day until the next election, I reject and fight that story. I work hard and I form ideas and I meet and talk to other people who feel like me, and we sit down and drink hot chocolate (I have plenty) and we plan. We plan like mofos. We figure out how to fight back, and do good in this infuriating world that constantly wants to bend toward the bad. And we will be kind to each other, and supportive of each other’s ideas, and we will do literally anything but accept this as our fate.

And let me say something to the young girls who are reading this. Hi, girls. On behalf of the grown-ups of America who care about you and your futures, I am awfully sorry about how miserably we screwed this up. We elected a giant farting T. rex who does not like you, or care about you, or think about you, unless he is scanning your bodies with his creepy T. rex eyes, or trying to physically grab you like a toy his daddy got him (or would have, if his daddy had loved him). (Sorry, that was a low blow.) (Actually, not sorry, I’m pissed, and I’m on a roll, so zip it, super-ego!) Our President-Elect is everything you should abhor, and fear, in a male role model. He has spent his life telling you, and girls and women like you, that your lives are valueless except as sexual objects. He has demeaned you, and belittled you, and put you in a little box to be looked at and not heard. It is your job, and the job of girls and women like you, to bust out.

You are going to run this country, and this world, very soon. So you will not listen to this man, or the 75-year-old, doughy-faced, gray-haired nightmare men like him, when they try to tell you where to stand or how to behave or what you can and cannot do with your own bodies, or what you should or should not think with your own minds. You will not be cowed or discouraged by his stream of retrogressive babble. You won’t have time to be cowed, because you will be too busy working and learning and communing with other girls and women like you, and when the time comes you will effortlessly flick away his miserable, petty misogynistic worldview like a fly on your picnic potato salad.

Now find your team, and get to work. Jerry Seinfeld on The Late Show with Stephen Colbert