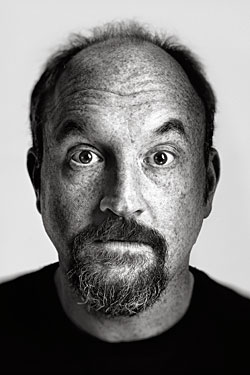 As part of this week's TV issue of New York magazine, everyone's favorite stand-up comedian of today, Louis CK, gets himself profiled in advance of the second season of his revolutionary FX sitcom, Louie. For background on his process for season one, read my interview with Louis CK from June 2010.

What makes his sitcom so revolutionary, not just for comedian-based sitcoms, but for TV?

As the New York piece reiterates:

Television showrunners are notorious multitaskers, with the most successful able to toggle easily between the roles of CEO and auteur. But Louis‚Äôs work on Louie requires a whole different level of personal oversight. The show is based on his life. Louis is the director. He‚Äôs also the only writer, the sole editor (he no longer shares duties with the co-editor he had last season), not to mention the person who oversees music (when the music guy‚Äôs budget ran out, he decided to do it himself). He also hired his own casting team: Last season, he turned down FX‚Äôs offer to help out and doesn‚Äôt inform them about casting in advance. But perhaps the most unusual aspect of the show is that Louis C.K. gets no notes from the network during filming, no script approval‚Äîan unheard-of ‚ÄúLouis C.K. deal‚Äù that has made him the envy of comics and TV writers alike. It‚Äôs a situation Louis is not taking for granted.

‚ÄúNo one on the planet Earth has what I have right now,‚Äù he says in his trademark tone‚Äîa deadpan delivery that somehow manages to sound at once bleak and exhilarated. ‚ÄúNo one ever has. And I don‚Äôt know that I ever will again.‚Äù

What’s Your Calling? Adam McKay talks “Anchorman,” “The Other Guys,” and chasing the funny feeling