Anything Shaq can do, Ron Artest can do better? Well, that remains to be seen, but Artest sure seems willing to give live comedy a try, as the Los Angeles Laker will spend at least two nights after the 2010-11 NBA season ends this summer hosting stand-up (and performing, too!) at Carolines on Broadway in New York City. 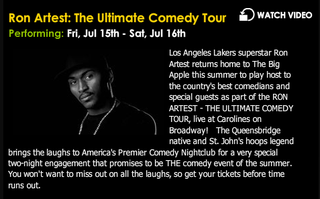 Ron Artest: The Ultimate Comedy Tour, will play Carolines on July 15-16, 2011. Tickets are now on sale via the club's site. No word yet on what comedians will be helping Artest fill out the bill, but the eccentric headline-grabbing basketball star certainly won't lack for things to say or do onstage.

Artest is a Queens native who played college hoops at St. John's. He's in his 13th NBA season and second with the Lakers.

Shaquille O'Neal, of course, is not only a former Laker and current player for the Boston Celtics, but also has hosted and sat in the front row for multiple years of Shaquille O'Neal All Star Comedy Jam specials that also have aired on Showtime.

One thought on “Ron Artest: Stand-up comedian? NBA star to host two nights of comedy this summer at Carolines”