American: The Bill Hicks Story, debuted a year ago on the film festival circuit. 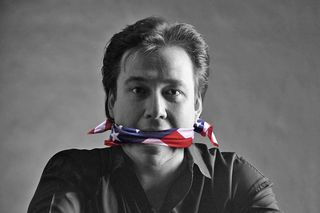 Starting tonight in New York City, and continuing through the weekend, the visually stunning and compelling documentary of the late, great stand-up comedian gets a new theatrical run — complete with live panels featuring friends and family of Hicks. The theatrical run will extend to about 30 cities in the U.S. and Canada over the next month. It'll also be available to watch on demand via iTunes and Amazon.com if the film doesn't make it near you, and also on DVD in America this June.

It opens tonight for a weeklong run at Cinema Village in Manhattan's East Village, with directors Matt Harlock and Paul Thomas on hand for a panel after the 7 p.m. screening alongside Eddie Brill, Jamie Kilstein, John Farneti, Steve Hicks and a special guest moderator (whom you may recognize from the cable television). Farneti also will perform a 10-minute set before the 9:15 screening tonight; Saturday features an in-depth Q&A with the directors after the 7:15 p.m. screening, with Farneti again on duty for the 9:15; Sunday features pre-screening sets from Nate Bargatze, Dan Soder and Harris Stanton.

In Los Angeles next week, The Comedy Store hosts an invite-only screening on April 13.

When the film debuts at the Laemmle Sunset 5 on April 15, Paul Provenza will host the first night's screening with a panel that includes Kelly Carlin, with Bob Weide hosting an in-depth Q&A with the filmmakers on April 16, and Colin Hanks interviewing Kevin Booth on April 17. That weekend also sees the start of runs at Seattle's Grand Illusion and Portland's Hollywood Theater.

The following weekend sees special events in both Austin and Houston, Hicks' comedy home. The directors and surprise guests will host the April 22 screening at Austin's Alamo Drafthouse on South Lamar. In Houston, the film will screen at the Alamo Drafthouse West Oaks, with a special comedy evening with John Wessling and a Q&A on April 24.

Other cities and start dates: