Hannibal Buress recorded "My Name is Hannibal" back in January 2009 at the Lakeshore Theater in his native Chicago. The Lakeshore has since closed, but everything else in comedy opened up for Buress in a big way between then and now. 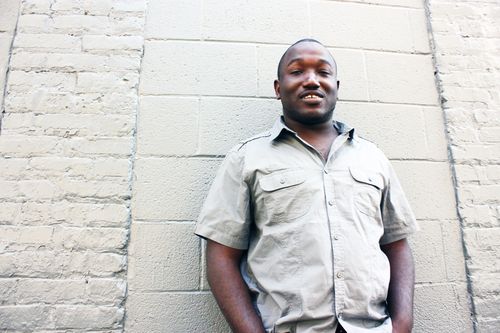 We're talking about a guy whose TV set was so strong, that in only a few minutes on Late Night with Jimmy Fallon, he impressed them and Lorne Michaels enough to offer him a job — without a writing packet — writing for SNL. A guy who started a weekly comedy night from scratch in a rock club lounge in Williamsburg that is packed despite the fact that crowds likely know none of the other comedians on the bill — except for the times that someone like Chris Rock drops in. That's the kind of respect Buress has garnered in the past year and a half from the industry and his peers. And it's all well-deserved.

I may have said before on this site that Buress in some ways reminds me a bit of the late Mitch Hedberg, and I mean that in only the great ways. The ways he creates suspense where you might not have found any, and how his laidback style does not in any way shortchange his stage presence or confidence, not even when he acknowledges the weirdness of any situation in the room. On "My Name is Hannibal," Buress even jokes during the track "In the Streets" about taking an intermission — or maybe two or three — and breaking all of the momentum for the recording. Since he recorded this more than 18 months ago, many of you who have seen Buress live in 2010 have heard all-new material that's not on the disc, so for that reason alone, you'll have to pick it up to catch up and complete your collection.

Buress wasn't afraid to take on President Obama in the month he took office in his own city, opening a bit about him by saying: "I like that Barack got that job. It's a cool job." When most other comedians focused on race, Buress chose to examine how Obama was able to take a permanent vacation from his already cool job as a U.S. Senator to apply for an even better job. On a less serious note, Buress considers the man who came up with the "flaming Dr. Pepper" cocktail, why rapists came up with pillaging, people who leave comments on Internet porn, and why your neighborhood should not include a 24-hour pawn shop. More than a few jokes are written from the perspective of a laidback guy who is having his relaxing life interrupted by the harsh and sometimes surreal aspects of the outside reality. When confronted by people to be funny, he wonders why poets are not equally confronted. And he has a definite penchant for the number seven, whether it's the number of cookies a stranger can request on his birthday, to the flicks of pickle juice to flavor a sandwich, or acceptable populations of pet iguanas. I don't know if seven if his lucky number or not, but lucky for us, we have 50 minutes to enjoy his comedy anytime we want now, thanks to "My Name is Hannibal."

Here's a short clip from Buress in case you're thinking of buying his CD in a store:

Jim Norton speaks his dirty little mind as an “American Degenerate” on EPIX, releases “Please Be Offended” on CD

Gabriel Iglesias on the big-screen in “The Fluffy Movie”