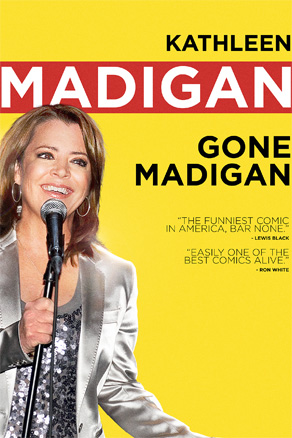 In "Gone Madigan," Kathleen Madigan's first hour-long stand-up set recorded for DVD since 2006, she proves that she remains one of the best women, if not the best, working on the stand-up comedy circuit.

She does so simply by using her common-sense philosophy to analyze the madness that surrounds us.

Of course, it helps to have the backing of another popular comedian in Lewis Black, who jokingly calls her "my BFF" before introducing her to the stage in New York City for the taping of "Gone Madigan" (it debuted over the weekend on Showtime, and will be available on DVD as of Jan. 11, 2011).

After first ingratiating herself with the audience by acknowledging her perennial obsession with using WebMD to self-diagnose her imaginary diseases, Madigan notes that, much like Black, she has gone overseas several times to entertain the troops. In fact, Madigan and Black usually go on the same USO Tours together. Whereas Black talked on his most recent DVD about a gig on which they shared the bill with Vince Gill, Madigan poked fun at sharing bunk beds and troop visits with Kellie Pickler. "Kellie's hilarious, but she doesn't know why," Madigan noted. More impressively, Madigan took a look at the cityscape of Afghanistan, and after receiving a military briefing about how much American efforts have improved it, observed: "That's amazing. When we're done, we should invade Detroit!"

Madigan, who grew up in and has family in St. Louis, also wondered about how many people signed up for the National Guard after seeing a TV ad and imagined they'd be stuck in Afghanistan, or Iraq, or Bosnia. "That is good for Bosnia, but who the fuck is guarding Missouri?"

Related side note: Madigan just embarked on her 2010 holiday USO tour, and here she is in some footage from a recent show at Camp Liberty in Iraq. Roll it!

Back to "Gone Madigan," though, Madigan still acknowledges that during the 2008 election campaign, she preferred Hillary Clinton over Barack Obama, and jokes both about the arguments she had with her father about it, as well as how Obama got the last laugh by keeping Clinton out of the country as Secretary of State.

If you want to know how a couple of Catholics would react to a tour of the Mormon Temple, how to use our fear of terrorism to improve health care, how to solve illegal immigration through reality TV, how to know why Sarah Palin isn't right, what job Paula Abdul should really have, how Madigan knew the economy was falling apart years ago, and why people believe in leprechauns — well, Madigan has a take on all of that that's both funny and reasonable.

She takes on Oprah, the nightly news, and Tiger Woods, all without going for the first joke.

And Madigan gives several examples of how her family's inane conversations and stories have fueled her stand-up long before anyone went to Twitter or CBS to share the $h*! My Dad Says.

But it has been the no-nonsense wit and wisdom that Kathleen Madigan says that has kept her busy and rewarding as a headlining comedian for the better part of two decades. She can go Madigan anytime as far as I'm concerned.