Strap in, comedy fans. We're about to see 10 comedians perform stand-up on primetime network TV in front of giant letters lit up in light bulbs to spell out "COMIC." But nobody is king (nor queen) just yet, so none of these 10 can rightfully wear a robe and crown like Ricky Gervais did for his stand-up special. Nope. Not yet. This…is…Last Comic Standing. Season Seven. The final 10. Here we go! Host Craig Robinson is excited. The judges are not excited, since they are not televised this evening. 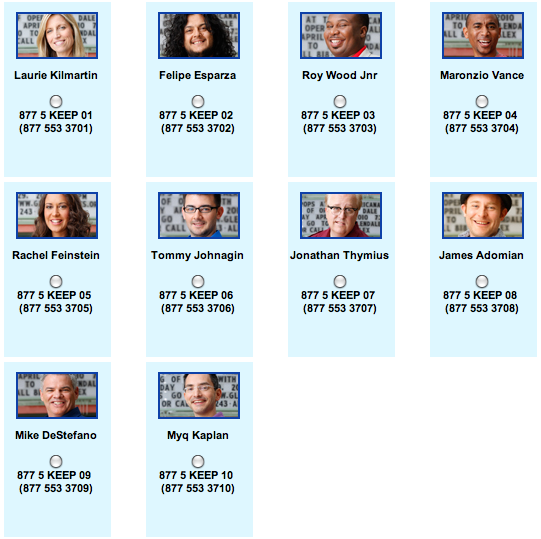 Laurie Kilmartin said she has thought about quitting the comedy game before, so she just "wants to have fun while I'm here," whether she finishes first or tenth. Kilmartin opens with a premise that her ex-boyfriend wants to get back with her — cue the ooohs and boos from the live studio audience, and as if they were cued, they ooh and boo. Good job, live studio audience! Wait. We're supposed to be listening to those expertly-crafted jokes that the judges kept telling us that Kilmartin was writing. She mocks her ex's mistress for her misspellings. And she jokes that her son can only be good if he's gay. And yet, he also makes her want to give up, while on the toilet, or even when reading "The Little Engine That Could" for the sixth time in one evening.

Felipe Esparza is up next, and this is the biggest thing for his career — c'mon, now, this is obviously the biggest thing for the careers of all 10 of these comedians, otherwise they wouldn't be here, but that's just one of the things that people on a reality TV contest have to say. That, and this is nerve-wracking. And eventually someone will have to say that he or she is not here to make friends. Esparza comes off, though, as the kind of guy who would be anybody's friend. He jokes about his frequent ride-alongs with the police, and Fortune Feimster is forced to watch from the audience as he jokes about getting his college degree. He says Mexico would help America with the war in Iraq, if only they could hitch a ride. And one smiling white (albeit blue-lit) woman gets every visual cue to smile when Esparza says a punchline about immigration, and she is even shown giving him a standing ovation.

Roy Wood Jr. tells us he auditioned in 2002 and 2007 for the show, and his goal is the same this year, except he is much closer to reaching that goal, as Tom Shillue can see from that background shot of a previous episode that did not acknowledge his presence. Third time the charm for Wood? He has a sharp opening line about getting punched in the face at a sports bar, and about a fan who takes it a little too far. He also thinks there is a way to make swimming more popular, and swimmers will not like it one bit. And why would you kick him out for giving kids realism in their Career Day. We all need chicken nuggets and lap dances! That may be the wrong message for first graders, but Americans are on board. Unless they are vegan and feminists. That might be redundant. I don't know.

Maronzio Vance is happy to be recognized and to introduce himself to America. And the idea of paying off debt makes him even happier, although he needs to let his face and his voice know that. What if you do not have money to buy all of the things a superhero needs? Vance's premise: Pay Attention Man. When he starts talking about talking to his agent, it seems as if this might be a time to stop paying attention, so he gets our attention by using words such as T as in Testicles to wake us up. Did it work? He does shoot a look into the camera. Ladies?

Rachel Feinstein cannot believe she is not getting rejected. Apparently, she has been getting rejected. Stop rejecting her. OK. Feinstein starts in immediately with a bit about her mother being white but going to lots of rap battles, so that allows her to use her mother's voice whilst describing rap. She imagines her mother trying to rescue a black school. But wait. Have you heard her channel her grandmother? Scary good. Hopefully for Feinstein, America believes it's more good and less scary. Abrupt finish there, for reasons unexplained. Did they say they would cut the mic if anyone went long? Because they didn't tell us.

Robinson is explaining the rules of voting, somewhat. Something about wait for the end of the show, but not too late afterward, and 10 votes per phone and computer.

In case you were wondering where the judges were this week, well, Natasha Leggero just chimed in on Twitter with a quip and an alert that she, Andy Kindler and Greg Giraldo will be back on the show next week. Hooray!

"Is this where you try to make me cry?" Tommy Johnagin cracks in his offstage confessional. One thing you do not want to hear from your mom is a question about cocaine. A dark bit about visiting his grandmother before she dies gets an applause break, and he follows that with a bit about his grandfather crashing into a business while his grandmother was inside. He jokes that old people should be able to do what they want, as if that's not already the law, and also has a strong opinion about strip clubs that employ, and I quote for the sake of accuracy: "ugly chicks."

Jonathan Thymius says "I don't have a career," so this will help. His early successes on this show have come by surprising the audience's expectations. He starts slowly, on purpose. First joke doesn't hit, as the Brady Bunch wasn't much of a surprise reveal. Second joke about his diet does hit. Uh oh. After he burps into the microphone for a punchline from God, he says he's going to juggle. Will this be like the time he tried ventriloquism? Um, not exactly. Wow. That was low-key. I don't know how to feel about what I just saw, and nobody is here to guide me, nor hold me. Somebody hold me.

Here comes James Adomian, who is delivering a performance for the camera offstage. Onstage, he's sporting a tie and a throwback hat. "You guys like Aesop's Fables?" Audience doesn't seem to know what that even means, but Adomian gets to use the word "icehole" for the first time since Johnny Dangerously! Somewhere, Joe Piscopo's biceps exploded. Adomian is doing fairly straightforward stand-up, and yet, his specialty is impersonations, so how about his Paul Giamatti as John Adams?

Mike DeStefano is here to win, and he told me he killed at this taping. First premise gets a laugh, as he suggests that some people should not have good self-esteem. Just saying he feels like a chubby white girl to a black man gets a slight applause break, as does his notion that black guys walk around with music in their head. He also tells about one of the guys he worked with as a drug counselor, and when he is done, more than a few people are giving him a standing ovation.

They're saving Myq Kaplan for last, eh? Oh, my. He did use the same opening line as he did on the previous broadcast, as well as a reference to DeStefano as the previous comedian to joke that he is, also, a "tough guy." His bit about vegans works despite the studio audience's frequent outbursts. Rushed the rest of it a little, but he maintains a calm demeanor standing next to Robinson afterward.

So they're getting rid of the bottom three…who was your favorite of the night, and whom do you think is in the biggest danger of getting sent home on TV next Monday? I'll wait until the West Coast gets to watch before I weigh in with a guess or two or more.

Unprotected Sketch! at the TCF

9 thoughts on “Last Comic Standing 7: The final 10 perform for your votes, America”