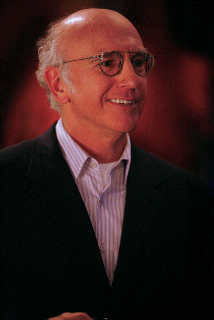 The Writers Guild of America announced today it would honor Larry David with the WGA-West's 2010 Paddy Chayefsky Laurel Award for Television, "given to writers who have advanced the literature of television throughout the years and made outstanding contributions to the profession of the television writer." David will receive his award Feb. 20, 2010, at the WGA's West Coast ceremony.

Of course, David famously helped Jerry Seinfeld create, produce and write seminal 1990s sitcom Seinfeld, and David's writing fueled many of the best episodes. He won an Emmy and WGA for writing "The Contest" episode, and earned additional nominations and wins from the WGA for both Seinfeld and Curb Your Enthusiasm. What's more than slightly amusing about David's honors for Curb — from the WGA, in particular — is that his HBO series is known for having little more than a outline from David to inform all of its characters, who then improvise the actual script. The future of the television writer is…improv!

Don't get me wrong. I loved Seinfeld. I love Curb. I think Larry David is responsible for making both of these shows great and should be rewarded. But still. It's more than slightly amusing.

Here's the money quote from WGA-W president John Wells: ‚ÄúFor a writer who‚Äôs made a successful career creating hit television shows about ‚Äònothing,‚Äô Larry David is truly something among writers,‚Äù said. ‚ÄúHe has altered the TV comedy landscape and influenced a generation of writers, all the while keeping audiences laughing for two decades by mining comic gold from our most human, awkward, and revealing moments.‚Äù

Notes from the Del Close Marathon