John Cleese was forced to postpone his scheduled all-British comedy "Gala" last night at Montreal's Just For Laughs festival after being diagnosed with an inflamed prostate gland. Bruce Hills, COO for Just For Laughs, took center stage shortly after the scheduled 7 p.m. Eastern start time for the grand theatrical (and televised) production, telling fans: "John Cleese has fallen ill." Hills told the crowd that a late cancellation was so rare, "this has never happened before" in the more than quarter-century history of the citywide comedy fest. 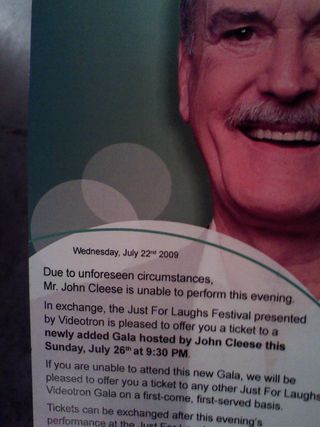 After last night's Gala, which went on with Lewis Black substituting as host, fans who had spent upward of $175 per ticket to see the Monty Python legend were given cards like the one pictured here with instructions on how to exchange their ticket stubs for a pass to a new free Gala that was added to Sunday night's schedule. Hills said that Cleese had prepped his sketches and routines for this Montreal show for more than a week (in fact, Cleese had just hosted a similar gala last weekend in Toronto) and hoped to be fully able to perform them by Sunday.

Black, already in the French-Canadian city to host Thursday's Gala, also apologized, suggesting that perhaps, "What I would do is hire a French comic to speak entirely in French and use the entire time to talk about why the French hate the British." When that didn't get as much of roar as he had hoped, Lewis added: "But I'm a substitute!" Later in the show, he observed: "I'm still a little surprised that they went from John Cleese to a miserable aging Jewish prick!"

A moment later, a voice near the front of the theater called out: "So were we!"

For his part, British comedian Ross Noble, amid 10 or so minutes of nonstop riffing and meandering about the stage — offered his own improvised tribute to Cleese by imagining he had "died" and become part of his very own version of Python's famous "Dead Parrot" sketch, with someone at the hospital arguing, "He's not dead. He's just resting."