Tracy Morgan hosted Laffapalooza 2008, which airs tonight on TBS, but taped last weekend at The Comedy Festival in Las Vegas, with Sheryl Underwood, Earthquake, Corey Holcomb, Mark Curry and Lavell Crawford performing. They sat me in the front row, which made it difficult to take notes, though on the bright side, there's a fair chance you'll see me during the telecast. Here's what I can tell you: 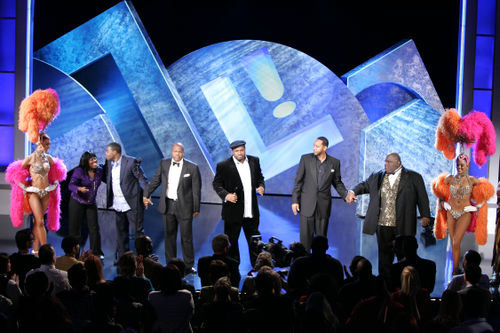 Jamie Foxx started Laffapalooza in Atlanta a few years back, but he managed to show up in the audience at Caesars Palace for the taping (sadly, he did not perform). Foxx literally stopped the show when he and his entourage entered the ballroom. Audience members as well as Morgan shouted their approval for the Oscar-winning man behind the plans. Later during taping, Foxx's sister arrived from the other side with our own group of friends in tow.

Before taping even began, Morgan showed he was ready to go off the script (literally, as he had a teleprompter that beckoned him throughout to get back on message), but all in good fun. He welcomed Eva, third-season winner of America's Next Top Model, who sat up front with her boyfriend, Lance Gross from Tyler Perry's House of Payne. Morgan also had fun with the Vegas audience. "We're in a financial crisis, you're at the casino…trying to win your house back!" Morgan also had a Michelle Obama moment while the cameras presumably were not rolling, when he said that at 40 years old, "For the first time in my life, I'm proud to be an American." Morgan was talking not only about the fact that America had elected Barack Obama president, but also referenced how much the world has turned on America during the Bush Administration. Heady stuff for a guy who has a public image of being crazy and/or aloof.

Sheryl Underwood got introduced as a black Republican, and true to her intro, she had most of her jokes reserved for questioning the tactics of John McCain and Sarah Palin in their GOP bid for the White House this year. Earthquake came out in a tux and with a Vegas showgirl on each arm (as Crawford would later), joking about politics, and also Chicago and marriage. Corey Holcomb took things down a notch, sitting on a stool and not seeming to worry about playing to the live audience (so it'll be interesting to see if it plays better on TV). Mark Curry, meanwhile, brought the house down with his set, which was so big and physical and full of jokes that I could barely find a time to get my notepad out to document much of it. Curry did make good physical use of the stool, I do recall. And I could not forget that Lavell Crawford devoted much of his set to his mother and his childhood, because his mother was sitting two chairs away from me. She and her friend were in stitches. They presented plenty of material, and Morgan, while he had to redo a couple of lines a couple of times, had more than enough between-show banter and jokes to keep the audience from getting too restless. I'm curious to see what makes it to air tonight and what gets left on the cutting-room floor.