You know how some people seem so nice, you cannot believe how nice they are? Boston-based stand-up comedian Josh Gondelman is most definitely one of those nice guys, and his day job as a pre-school teacher only makes him seem too nice to be true. Well, congratulations are in store for Gondelman, who flew down to Atlanta earlier this month and returned with the trophy for winning the stand-up contest at the inaugural Laughing Skull Comedy Festival. 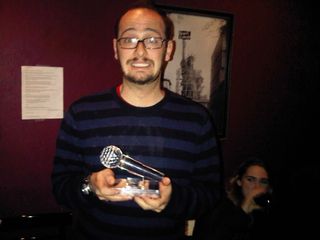 Here is Gondelman with his prize. Well, actually, that's not all he won, as the festival promised $1,000, automatic bids into the APCA Showcase, Rooftop Comedy's Aspen festival, the Asheville comedy festival, six months of work with clubs across the country that agreed to be the Laughing Skull fest's patrons, and looks from industry folk. I'd hoped to be in Atlanta for the festival/contest, too, but a family emergency kept me away. So I caught up with Gondelman this week and asked him to tell me all about it. (He also wrote a little bit already on his road blog.)

I know you've done the Boston festival contest multiple times. How would you compare that contest with the inaugural one in Atlanta?

I've done the Boston festival for the past few years, and there are a couple of differences that jumped out at me right away. Atlanta seemed to have a way more relaxed vibe, overall. With Boston, it always seems like everything is riding on every set even for the people that aren't performing. That could be because Tom Dustin does such a good job of getting people to buy into his NCAA style BCF pool (which I love). But at the Laughing Skull, there were more people just hanging out and mingling and enjoying themselves. I was definitely rooting for everyone to succeed in Atlanta, where in Boston, I always feel like I'm waiting to see how everyone does with bated breath. Also, in Atlanta, the industry presence was there from the beginning of the week, which is helpful because it takes the pressure off of you somewhat to get into the semifinals or the finals. One of my favorite things about the BCF, though, is how it seems like there are infinity comedians around all the time. And that's really fun and cool. People from all over come to town and hang out, which doesn't happen all the time, since there's no real mid-sized venue for comics who work the road to play.

Did your Boston experience prepare you for the fast-paced nature of Atlanta's schedule? Did it make you do anything differently this time around?

My experiences in Boston definitely helped me prepare for the style of the Laughing Skull competition, but I guess one thing that helped just as much was that when I did the Boston festival, I've always had my day job to go back to in the morning, but in Atlanta, I was all about the comedy, which was relaxing, to not have to teach preschool, go to a high-pressure show, and then return to preschool in the morning. I did the Seattle contest last November, too, and that was a lot of fun. There was a very strong group dynamic that evolved over the course of the week, since it was only 16 comics out there at a time.

Two of the things the Atlanta people wanted to stress was 1) making the festival fun for everyone by having events that weren't about the contest, and 2) making the contest worth something. So. Had you been to Atlanta before? How was the experience outside of the actual competition?

Marshall Chiles and Steve Hofstetter and Trey Toller and Jess Mozes who did most of the organizey things did a great job of putting everyone at ease. The hangouts after shows at the Vortex felt really low-key and enjoyable. Overall, it was a lot of fun, and comics and their significant others and industry people all played kickball together on the last day, which was great. The atmosphere gave everyone the chance to put their best foot forward. (Pun unintended, then briefly deleted, then reinserted with intention.) I had never been to Atlanta before, outside of layovers in the airport, and I mostly stuck around in the midtown region, which was very nice. I also met up with sort of a long lost cousin for brunch, and that was pretty great. I'd like to go back and do all the touristy stuff I was too tired to do because I was up all night at shows.

And in terms of the contest, what does winning mean for you and for your comedy career? People have told me that you received representation in addition to lots of paid gigs. What can you tell me? What's next for you?

The prize included entry into the Laugh Your Asheville Off Festival and the Rooftop Aspen Festival, which I'm really excited about doing. Plus, I'm supposed to be able to line up twenty-four weeks of work on the road in the next year or so out of it. I'm waiting for that to materialize, so I'm a little nervous, but it's not too bad, because everyone I've done follow-up or outreach with has been really supportive and cool about things. I also made some great contacts outside the actual promised work, so that's exciting as well. I'm definitely sticking around at my day job until after my students graduate in June, but then my bosses were super cool about giving me the whole summer off to tour, and they were so nice about saying that if I end up back in town, they'd give me hours, but the hope is I can mostly make a living off of comedy and comedy-related enterprises. My ideal career would be writing for television and then getting to tour as a headliner in the off-season. That's what I'm working towards. We'll see! I'm really enjoying taking things as they come, and this was a really wonderful and surprising turn of events.

And what advice would you have for anyone else thinking of submitting to a comedy contest, whether it's in your town or far, far away? I don't really consider myself an ace at contests in general, but I felt like the thing that helps is for a comic to accentuate what is the most distinctive about him or her rather than trying to do the jokes that "work" the best. So many people over the course of a week end up running together in peoples' minds, just by default, so being memorable and unique and funny and original is what I was striving for. Also, whenever I go for something like a contest I plan to just go and have fun rather than being super-competitive. That way, if the crowd isn't into me or the judging breaks bad, I still have a week to visit a fun city. But that's my attitude about most things. I'm pretty optimistic.

Are you a fan of Josh Gondelman yet? You could join Josh Gondelman's Facebook group. And if you have yet to see him perform, here is a recent set of his performed at The Comedy Studio in Cambridge, Mass. Roll it!

Chris Rock, at the TCF