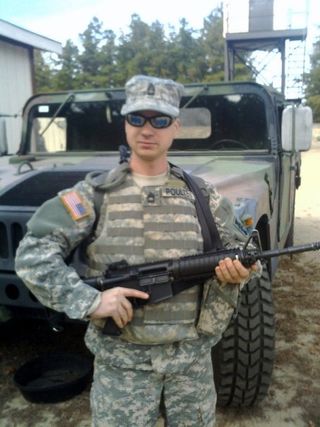 How many comedians also are military veterans? Rob Riggle served in the Marine Corps before becoming an SNL featured player and Daily Show correspondent. And then there's Benari Poulten, make that Sgt. First Class Benari Poulten of the Army Reserves. When living in New York City, Poulten is part of the Shoot the Messenger production, writing and performing crew, helping to skewer the morning TV news machine, and also spending a few days here and there serving our nation. Until Poulten got called for active duty. After a farewell party in late September, Poulten shipped off for training in Alabama, and is expected to spend 2009 in Baghdad helping serve the Army's communications functions out of Iraq. As Poulten and I joked then, Shoot the Messenger's mocking misinformation probably already would be good training for military disinformation. Don't worry, U.S. Army, those were my joking words, not his.

Poulten says his friends and comedians should still be able to follow him through his military service through Facebook. Ah, the modern war. When Veterans Day rolled around, I thought of Poulten and reached out to him online. Turns out he got to spend Thanksgiving weekend home with his family, and you'll also be able to see and hear him live tonight in Boston, at Mottley's Comedy Club, opening for Jon Fisch.

Here is what else Poulten had to tell me about his life in active service:

Just got done with three days of Iraqi culture training where we’ve
gotten outstanding instruction from an Iraqi woman who now works for
DoD (Department of Defense).   I’ve learned such helpful Iraqi phrases
as “tasharafna”, meaning “I’m pleased to meet you.”  Or “Shukran il
musaa’atek”, “Thank you for your help.”  And “Thib slaaHak tara armee,”
“Drop your weapon or I will shoot.”

We’re back in Alabama now after three weeks at the Reserve Training
Center at Fort Dix in New Jersey.   That was heavily focused on “real”
Army stuff like weapons qualifications and maneuvers.  We also trained
up on common military tasks – like mounted patrols, reacting to direct
and indirect live fire, counter-sniper attacks…you know, the common
tasks.

I spent election night in an MWR tent (Morale, Welfare, and Recreation
–- MWR) during a Field Training Exercise (FTX) with a handful of
soldiers who were rooting for my guy (the black guy).   There were
actually two tents, one playing CNN and one playing Fox News.  We kept
bouncing back and forth between the two, watching the difference in
election coverage.

It was a little bizarre for me watching the election instead of
actually working on the campaign, especially considering the
circumstances.    As the night wore on, most of my buddies wandered
back to their tents, confident that they’d be waking up to the news
that their new Commander-in-Chief would be named Obama.  But I had to
see it through.

By the end of the night, it was just me and two other soldiers bearing
witness to history.   We watched and cheered and smiled and nodded and
called friends and family and just generally felt happy about the
country we’ve sworn to defend.

A fellow Sergeant First Class, a black guy, just kept smiling.  “My
son,” he said to me.  “My son is going to be born under a Black
President.   It’s gonna be a great year.  Too bad I’m gonna be in Iraq.”

Couldn’t have said it better myself.

It’d be nicer if you’d join in: Erin Judge on women making art vs. women critiquing it

One thought on “Sgt. Benari Poulten, home for the holidays”