If the show goes on, by 8:04 p.m. Central Daylight Time tonight, the comedians in Nashville, Tenn., will have broken the Guinness Book of World Records time for the longest continuous stand-up comedy show.

The Laugh Factory in Hollywood has the record with an 80-hour stand-up showcase for charity held in December 2010, which broke the 50-hour mark set by Comic Strip Live in New York City in July 2008 — which The Comic’s Comic attended and reported upon for the duration! That’s nothing compared to what Nashville StandUp is attempting: 169.5 straight hours of stand-up.

Nashville’s effort at The East Room began Sunday and continues through April 19, in conjunction with the city’s Wild West Comedy Festival.

Comedians are lining up for 15-minute or half-hour slots.

Billy Wayne Davis performed this morning, and told The Comic’s Comic afterward: “I got to live one of my dreams I didn’t know I had. Doing an hour of stand up to 15 people at 8 in the morning. It’s exactly like it sounds: weird, groggy, and a little painful but there was biscuits and gravy.”

BISCUITS AND GRAVY with @BillyWayneDavis! @YeastNashville catered the show! It's delicious. Come and eat breakfast. pic.twitter.com/ye4sXLSF3M

Nate Bargatze, who moved back to Nashville after a long stint in New York City and has his first hourlong Comedy Central special debuting in May, told The Comic’s Comic: “It has been awesome and everyone has been so supportive. I have done it twice. Did a hour one night and then went today at noon with Rory Scovel and we both went up. Going back with Hannibal (Buress) later today. It is great they are doing it and always a fun feeling when at any point day or night you can just think you know what I want to go do comedy and then go do it. I haven’t done a 6 a.m. set but kind of curious how that would feel so might try that. Overall impressed how supportive everyone has been and how well Chad and Daniel have done and all the local guys and girls that have kept this thing going.”

Nashville StandUp’s Chad Riden and DJ Buckley are producing the event. Riden took a few minutes out today to update The Comic’s Comic on how the record-breaking effort is progressing:

“This show is the greatest, dumbest thing we’ve ever done, but it’s also been a lot of fun and cathartic. How often can a hundred comics can hang out and get as much stage time as they want in a venue that prioritizes comedy above profits? The vibe here has been compared to summer camp. My co-producer DJ Buckley had not left the building since 8:30 a.m. Sunday morning until we finally sent him over to my house for a shower this afternoon. I’ve only left for about 3 hours each day to sleep and shower at home and drive my daughter to school in the morning. Several comics have slept in The East Room’s comics’ lounge in the balcony, just in case we needed emergency back-up audience members if we got too close to the 10-person minimum… or if we need somebody to wake up and do a set if we were running short on comics eligible to do a set at that time.

DJ and I scheduled ourselves every 4-5 hours so if we were off schedule we could fill or cut ourselves to get back on time. It’s predictably most difficult to book the late night / early morning spots so I’ve done at least an hour every morning and have been prepared to keep going until some other comic shows up, wakes up or becomes eligible to go back on stage. Tuesday I woke up Narado Moore out of a dead sleep to help me split a block that we had to fill from 6:42 a.m. to 9 and he knocked it out like a champ.  I set up a Google calendar so we could constantly update everybody with what spots were open when. We’ve got a Facebook group for performers so I can post to all of them if we need comics to get over here asap. Everybody is motivated to contribute and make this work.

DJ and I have handled hosting duties in shifts and when he finally crashes around 5 a.m., he has had to hide in different places around the building  so people wouldn’t be able to mess with him. I love this place but I’ll be damned if I sleep on a couch or the floor or wherever the hell DJs nest is when I have a king size waterbed at my house a mile and a half away.

Several comics and Zanies servers have spent the entire night helping us make sure we had enough people here no matter what, saying, “we’re all in this together.” We truly are. The East Room staff, the fans, the volunteers, the comics. It’s been touching watching everybody work together cohesively to make this stupid thing happen. People text us saying, “what do you need?” and bring us toilet paper, gum or whatever we’re out of. Rob Haynes said, “It’s like we’re running a FEMA camp.”

We had Nashville natives / alumni Nate Bargatze, Keith Alberstadt, Jessica Watkins, Tim Northern, Billy Wayne Davis and friend of Nashville Comedy Jon Reep scheduled in advance to do hours here and there, but we’ve also had drop in appearances from Ahmed Ahmed, Rory Scovel and Killer Beaz and expect a lot more from the comics in town for the Wild West Comedy Festival as our show continues through the rest of the week and the weekend.

It’s actually kind of addictive, keeping a show going at all times. We originally planned on ending at 8 p.m. Sunday the 19th, when my regular weekly Spiffy Squirrel Comedy Show would normally end, but now I think we should just keep going. Ben Jones, the owner of The East Room said we could keep going until it’s time for the band he has booked Monday the 20th to load in. I don’t want it to end. All I’ve ever cared about was comedy and if you ask me, “if you could be anywhere doing anything right now, what would it be?” the answer would always be “doing a show” so this has been a surreal utopia for me. We’ve already decided to do the same thing again next year and beat our own record by a minute, just to make it even more ridiculous than it already is.

I’ve only slept twelve hours total since Friday, so if I sound insane it’s because I’m loopy and generally feel like I’m zipping around the galaxy on George Clinton’s Mothership.”

There’s even a livestream, because, of course. So you can root them on from the comfort of your own home. 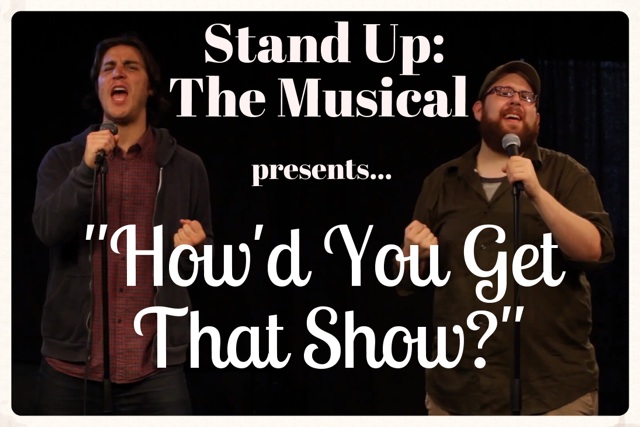 “How’d You Get That Show?” from Stand Up: The Musical

For Zach Galifianakis, on his birthday, a remix video on Funny or Die and an insightful NPR interview