Starting on Monday, Dec. 6, The Laugh Factory in Hollywood, Calif., plans to break that record and then some, aiming to host upward of 80 hours of continuous stand-up comedy on its stage in a holiday charity drive it's calling "Toy to the World." 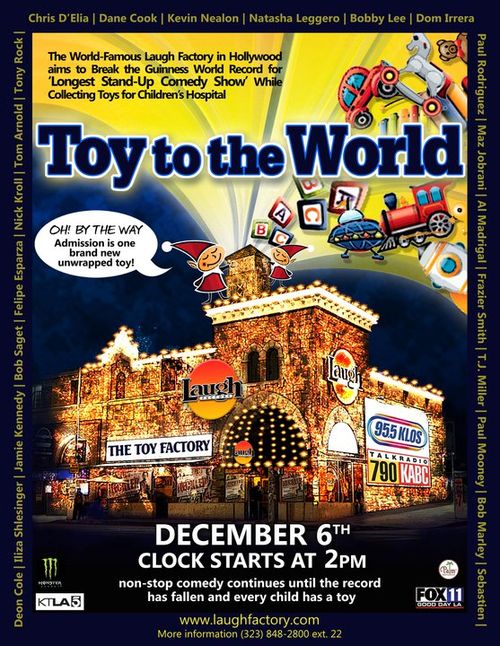 The show will begin at 2 p.m. Monday and extend into Thursday, with each comedian performing for at least 15 minutes — Jamie Masada's club already is encouraging stand-ups to go for Dane Cook's personal endurance record of more than seven hours (when Cook and Chappelle were taking turns holding court there a few years ago) — with at least 10 audience members in the club throughout the event.

Admission is a new toy in its original packaging worth $20 or more (or a gift card equivalent), with extra toys and donations for Children's Hospital Los Angeles.

If you're not in L.A., you can still watch the record attempt go down online via live-streaming. I'll post the details here on The Comic's Comic when available.

Earlier: My live coverage throughout the Comic Strip Live Marathon of 2008.

Kate Hendricks performs on The View