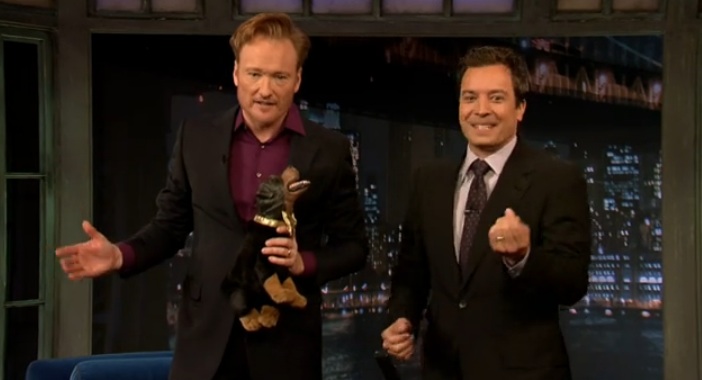 This could only happen under Comcast rule, because former NBC chief Jeff Zucker probably never would have let Conan O’Brien inside 30 Rockefeller Plaza, let alone up the elevators to appear on camera last night on Late Night with Jimmy Fallon.

O’Brien and Fallon exchanged quick quips about O’Brien’s past history with NBC — “Nice hair, Max? (love)” — and then O’Brien retrieved something of his that NBC had tried to keep behind the panel. Namely, Triumph the Insult Dog. Robert Smigel not included. Fallon then graciously plugged the fact that Conan is taping shows later this month in NYC at the Beacon Theatre.

Stephen Colbert wins a Grammy Award, and we’ve got the highlights, plus a Nobel Prize guarantee?

Showtime to showcase Romesh Ranganathan in “Just Another Immigrant” docu-series