One of the more intriguing events listed on the schedule for the 2010 Bridgetown Comedy Festival was a panel featuring writers for Conan O'Brien moderated by Jimmy Pardo, who had provided the audience warm-up comedy for the short-lived Conan edition of The Tonight Show. What would they say about the tumult that hit late-night TV just a few months earlier? What are they up to now? Are they still on Team Coco? 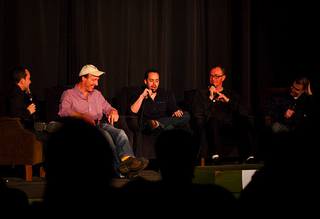 We'd get to some of that juicy news and gossip, but not after Pardo asked each of the writers present — Brian McCann, Josh Comers, Kevin Dorff and Dan Cronin — about how they originally had gotten hired for Conan. (Photo by Liezl)

McCann, who joined Late Night in 1995, said he had submitted writing packages at least three times since the show debuted in 1993, and joked that he thought his friendship with Andy Richter through their mutual performances in the Chicago improv scene would have gotten him in easily. As far as what earned approval even back then? "Conan was looking for ideas. Just endless ideas," McCann said. Crazy, topical, anything really. "He loves it all, as long as it makes him laugh."

As for the switch from NYC and LA, and moving from 12:35 a.m. to 11:35 p.m., McCann said the implied suggestions from on-high were to make the show "more presentational" like a "live road show." Which is, ironically, what Conan is doing this spring with his North American live tour of theaters. Dorff, meanwhile, had said the writers had heard last year to keep the show "Conan-centric." Before, the show's writers often were a big part of the mix with sketches before, during and after the guest panelists. "Give people time to get used to seeing this guy in this job which is new to him," Dorff said they were told. Cronin said that the WGA strike that lasted 14 weeks at the end of 2007 — when Conan eventually had to front and carry the entire load himself on the air — only drove home the point that Conan's Tonight Show would be more about Conan and less about all of the characters.

When TMZ.com began reporting that Jay Leno might slide back into late-night, bumping them to midnight or off the air entirely, the writers said they were as much in the dark as everyone else, it seemed. "It was an amazingly fast process, but…in that time, there was still disbelief," McCann said. They said Conan would convene daily staff meetings to reassure them, but each subsequent day, they read new gossip online and the daily meetings grew more ominous. "TMZ somehow knew a little more than Conan each day," McCann said. Pardo said Conan's mood kept shifting, "then one day, he wouldn't make eye contact and it looked like he had been in a fight."

Once Conan had announced he — and by he, meaning all of they — would be leaving, the staff was left with two weeks of shows and emotions that made it difficult at times to know what to write. Comers, who hadn't worked for the show in New York and moved out to L.A. as a monologue writer for Conan, recalled: "He was losing his dream job, and I was losing my dream job." Cronin recalled having to see giant billboards of Leno on his way driving into work each morning. "It was a really crappy time to live and work in Burbank." They all agreed, however, that Conan made the right call in not taking the compromised midnight slot after Leno.

"Conan was extremely strong as a guide through this process," McCann said. "He said, 'Everybody's watching us…let's make it great.'" And it largely was great. "You'd see your jokes everywhere, which was good for the ego," Comers said. "It was the most disciplined kind of fun…to only focus on what makes this funny."

Seeing the fan reaction via Team Coco surprised them, from the rally in front of their offices and beyond. "It was a surreal moment," Dorff said. "It was the first time I had to confront it." Dorff said he had avoided looking at fan messages about the show for years, mostly to avoid criticism and message-board comments from affecting him or getting him worked up. It was Conan's desire to end the finale with the musical jam with friends including Will Ferrell, and they said that ideas such as Jack McBrayer's NBC page tour interrupting his monologue were fairly easy to pitch and produce. Dorff knew McBrayer was in town for an awards show, pitched it that morning, and "he couldn't get down there fast enough" to help out.

And though none of the writers had heard anything solid about getting hired to work for Conan's new late-night show on TBS this fall, they said they hadn't really expected to. They already had helped write sketches and bits for him to perform on his live theater show, and they know he has his hands full with that through June.

Comedian To Do List: Men vs. Women, by Sara Schaefer

Conan O’Brien shot a special “Conan in Cuba” episode that will air March 4, 2015