Dear members of the mainstream media, gossip sites and bloggers,

Your coverage of Dave Chappelle’s comedy “comeback” has grown beyond wearisome and expanded into outright ignorance. 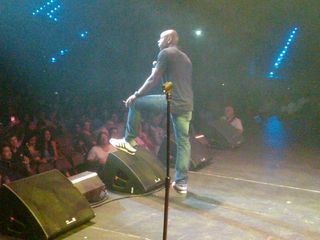 Sure, Chappelle had a rough gig Friday night as the closing act of a charity event that had included seven acts over two hours before he even walked onstage at the Seminole Hard Rock — and then he chose to abandon his act when audience members up front heckled him and videotaped him (photo by DJ Irie, who played him offstage almost an hour later). And yes, Chappelle returned to Alonzo Mourning’s Summer Groove gala the next night to make up for it.

But everyone seems to be missing the point.

For one thing, don’t call it a comeback.

That was in May 2005. By September 2005, he’d launched a nationwide stand-up tour that was still going strong the following summer. I know, because I covered his August 2006 stop in Boston for the Boston Herald, including the fact that ticketholders for that show were warned in explicit terms not to heckle him.

When I moved to New York City the following summer, I saw Chappelle making several unannounced drop-in sets at comedy clubs. He has done so ever since, not just in NYC, but also in Los Angeles, San Francisco and anywhere else that seems hospitable to him.

Chappelle performs when he wants, where he wants and without a doubt, how he wants. He’ll just as easily hop onstage with no material as he will with an hour or two (or more!) of topics on his mind that he’d like to share. He’s a master at riffing. He’s just naturally funny. These all are traits that would make any comedian envy him.

His massive fame allows him to be choosy about what projects he does onstage or onscreen. But that fame also can burden him.

So Chappelle prefers to do stand-up comedy on his own terms.

If you cannot handle that, or choose to read between the lines of any single performance of his, looking for signs of a “comeback,” then that’s your own fault.

View all posts by seanlmccarthy →