If you take one of your writing assistant's ideas and turn it into your own, you just might be a gold-digger. No? 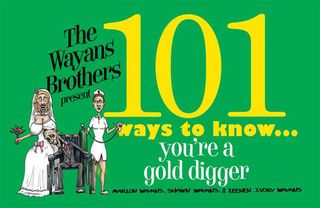 That's not a Jeff Foxworthy line, nor even my line, but the line Jared Edwards is using (so to speak) in his federal case against three of the Wayans brothers — Keenan Ivory, Shawn and Marlon — alleging they stole his jokes and idea for what would become their 2009 book, 101 Ways to Know You're a Golddigger.

The Wayans brothers also published similar books titled 101 Ways to Know It's Time to Get Out of Your Mama's House and 150 Ways to Tell if You're Ghetto.

Edwards, who worked for the Wayans brothers for a decade, filed suit shortly after the book hit stores and shelves in 2009. It's slated to go to federal trial proceedings on July 12, 2011.

Could a comedian ever win America’s Got Talent? (Again?)