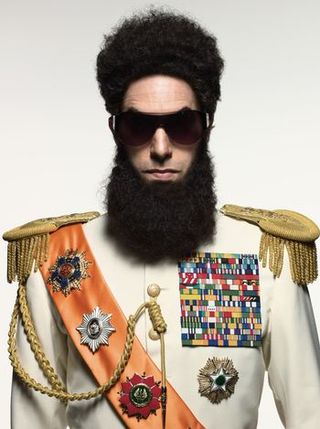 Sacha Baron Cohen and director Larry Charles descended upon Astoria — the friendly neighborhood of Queens, NY — this week with cast and crew to film scenes for their next collaboration, the 2012 comedy, The Dictator. Paramount Pictures even released the first "official" photo from The Dictator yesterday to the media, with Cohen all done up in miltary garb and beard.

Want to see what he looks like in the movie without the garb and beard?

The film also has SBC playing an innocent goat herder who replaces the aforementioned Middle Eastern/North African dictator, and has the dictator trying to rebuild his life in New York City. Or something like that. Or nothing like that. Who really knows what the script is, or whether it truly is based on a novel ghostwritten by Saddam Hussein? It sounds as much like a variation on the 1993 Kevin Kline comedy, Dave, as anything else, really. But it is a scripted, above-board major motion picture, unlike the Borat and Bruno films. 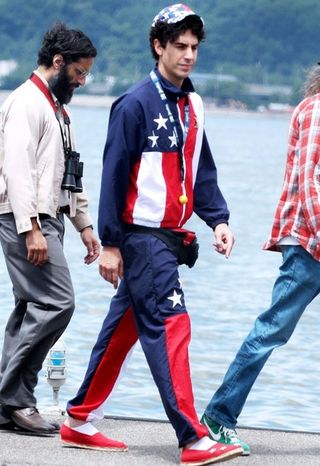 And the past two nights, SBC, Charles, and a cast and crew that has included waiters in fuzzy vests with T-shirts protesting the dictator, supporting actors, extras from the neighborhood, comedian Jason Mantzoukas (seen in full beard, walking behind Cohen in this paparazzi shot from a few days ago), another familiar famous comedian who I'm not sure I can name since I haven't seen him formally announced as part of the cast, filmed scenes in the Little Wadiya aka "Eastern Nights" restaurant space along Steinway Street. In Queens, at least, they're in production under the title Finchley Dreams.

Last night around midnight, a half-dozen extras paced back and forth along the sidewalk as background while cameras caught the action inside the restaurant, and directors and producers monitored from the adjacent Little Wadiya Cafe. Inside the restaurant, the actors are engaged in a heated discussion. Someone changes the sign at the door, flipping it from "C'mon in, we're Alladeen" to "Sorry, we're Alladeen." At one point, they change the lighting to capture Cohen's entrance into the restaurant from the sidewalk.

And that's when careful observers saw him.

Standing in a white t-shirt, light blue shorts, big belt, clean-shaven but with a mop-top of a hairdo, he didn't say anything. Just take after take of the movie's star walking briskly to the front door and entering, all the while background extras paced behind him.

It's a little blurry.

But then again, most of the details of a Sacha Baron Cohen movie generally are.

If I find out more about the movie that I can share with you, including the name of one of the mustachioed-waiters in the restaurant, then I'll be sure to do so.