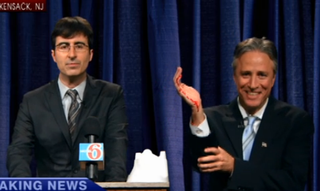 The Daily Show with Jon Stewart does not air live on Comedy Central, but they go with the first take anyhow. Which last night added another layer of comedy and drama to the proceedings, when, during a cold open bit in which Stewart held a press conference to apologize for not covering the actual press conference by his friend, Democratic Congressman Anthony Weiner, Stewart broke a cocktail glass and cut open his right hand.

So Stewart really did have blood on his hands over the Weiner penis-picture scandal!

What's also interesting is, after Stewart breaks the glass on the blender and says, "That's not good," how well Stewart and John Oliver ad-lib their way through the rest of the sketch. They remain committed to the bit, while at the same time, never losing sight of what's really dominating the scene.

Jesse Ventura for President in 2016? Here’s a vote for a Ventura-Adomian ticket!