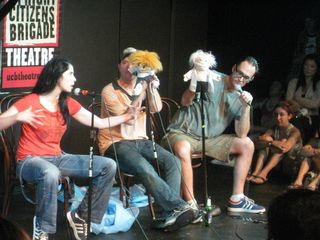 Sarah Silverman was the special "surprise" guest late Saturday night for Seth & Ed's Puppet Talk Show at the UCB's Del Close Marathon. Silverman had been hanging around with Rob Huebel and the gang from Respecto Montalban on Friday night (although she remained offstage then), as well as backstage at the UCB's theater, so if there was anyone to be a special guest, it had to be her. (Photo thanks to Rachel Sklar, who when she's not keeping the media in check at Mediaite, and before that, HuffPo, is also a great comedy fan. Follow her on Twitter! @rachelsklar)

As you can see in this clip, Silverman had some early mic issues, so Helms and Morris joked with her about that, as well as Steven Tyler's recent stage accident, Aerosmith tours, a potential sitcom co-starring Silverman and a puppet, the early New York City apartments for Silverman (she and her roommate had a run in with an ex-con) and Helms (who heard rats everywhere around him in Alphabet City), and naturally, a few jokes that skirt the lines of good taste. Burn victims, am I right? It was all in good fun, though:

You may have noticed that you can see Helms and Morris with their puppets. Normally, Seth & Ed's Puppet Talk Show has a full set at the UCB Theatre in Los Angeles, but Helms explained that they had to make do with less in NYC. For the first few minutes, they performed under a blue tarp of sorts, but quickly began complaining about how hot and sweltering they had made it for themselves. "Ed built this travel theater, and you can hardly see the difference," Morris quipped. Helms: "I've lost five pounds since we entered the theater!"

Silverman was a good sport, too, and showed up again later in the evening to take part in The Benson Interruption, Doug Benson's show in which he sits down and "interrupts" his stand-up guests. Huebel and Paul Scheer were Benson's other guests for that show, and when Benson gave Silverman a hard time for seemingly not playing along with an audience suggestion of "shallow Jell-O", she shot right back with a zinger of her own, saying Benson prepped her backstage thusly: "Can you hold my joint while I take this bong hit? Don't worry. Trust me. I'll be your net! I know you're not a UCBer."

Paul F. Tompkins on comedy in times of political correctness