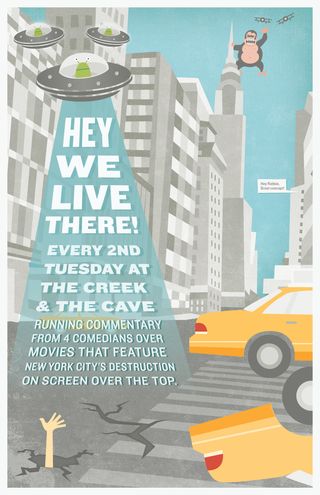 The summer blockbuster movie season usually brings about at least one box-office smash that also destroys at least one major city (or at least makes it seem that way, thanks to special effects), and more often than not, the city that gets plowed over is New York City.

Robbie Collier counts 52 feature films that so far have tried to wipe NYC off of the map.

So this summer, Collier is hosting a monthly series with New York comedians watching NYC get destroyed over and over, all whilst talking about the movie footage. Too soon? Hey, it's just a movie. The series is called "Hey, We Live There!" It kicked off in May with a look at "New York destroyed by Giant Monsters," with scenes from King Kong (1976), Godzilla (1998), King Kong (1933) and Ghostbusters (1984) — the second installment takes place tomorrow night at The Creek and the Cave in Long Island City.

The lineups this summer:

After the jump, I posed some questions to Collier about the series…

So, you do riff while the clips are playing, correct? But it's not like MST3K or its successors, because you're just looking at very specific clips of NYC being destroyed. Have you done this with any other cities?

Exactly.  The show definitely draws from Mystery Science Theater's formula, as in multiple comedians riffing, overdubbing, improvising over scenes, its just in this case, the source material is very specific to New York, and the comedians riffing all live here, so they're coming at it from a cool perspective.  Like I tell anyone who asks about the show, there is something really weird about seeing a city you live and work in getting destroyed over and over on film, and also something awesome about talking over shitty movies.  Put the two ideas together, and voila, you have "Hey We Live There!"

The NYC destruction scenes are always included in the excerpts we show, but in some cases, we also will include anything in that particular film that seems ripe for mockery, for example, the wolves in The Day After Tomorrow, or the scene where Jake Gyllenhaal and his crew are literally running from the cold.  The main NYC destruction has already taken place, so its nice to have some other stuff to add to it.  And I would fail as a comedian if I can't identify "running from cold" as ridiculous and giving an audience the chance to see it get made fun of.

Also, I think one of the best secret parts of being a comedian is just hanging out with other comedians, and this gives an audience the chance to do that for an hour each month in a different format. Sure you can see Mike Lawrence or Dan Soder or Ted Alexandro do stand-up, but how often do you get to sit around and watch a movie with them and hear what they have to say?  I think people so far have dug the concept, especially since there were so many people at the first show!

As for other cities, that's the eventual goal…I really want to do a special edition show with San Francisco, or Chicago or L.A. I mean with comedians constantly visiting from everywhere, it would be a neat way to build the show and create something fun.

Did you know all of these movies off the top of your head? How much research did you have to do to find movies to fit the various bills?

Ah, the research.  It's funny, this show started kind of by accident, after some friends and I sat around one night watching 2012 and just ripping it apart.  It was too much fun, and I got this idea that I wanted to do a show about talking over movies, but I wanted it to be unique enough that it wasnt just an MST3000 ripoff.

One day before leaving my place to head in to the city for a show, I was watching the meteor scene from Deep Impact, where New York just gets swamped at the end (spoiler alert) and it's this really brutal, crazy over-the-top scene and I was kind of shell shocked because you see the whole NYC skyline get destroyed and its just…anyways, I'm leaving my apartment, where I have a full view of that same skyline, intact and alive, and it was the weirdest feeling ever.

And that's when the two ideas somehow came together…Weird I know.

I started looking online, and Vulture and the New York Times ran a couple interesting stories about the subject which kind of got my imagination going further, and I started really digging in to it, looking on Wikipedia, imdb, etc.

I'll add, all my fellow comedians seem to have neverending examples they want me to use in future shows. Not a day has gone by where a comedian has not come up to me and said something like, "What about….?"  And then I take a look at it, and place it with the appropriate theme.

George Carlin: In his own words

New York Times kills off Laugh Lines blog: All the humor is not fit to link?

3 thoughts on “NYC destroyed on film, deconstructed by comedians: “Hey, We Live There!” summer series at The Creek”