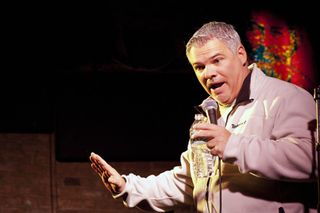 Too soon. This is just too soon. Comedian Mike DeStefano died last night from a heart attack.

DeStefano's quick bio on his website revealed his wit and his hardships:

But he was such a good guy and a great comedian. Many people only got to know the Bronx native a year ago when he competed in and almost won the seventh season of NBC's Last Comic Standing, and learned a lot more about him over the past several months as he went on a nationwide tour with the other finalists. DeStefano was working on a new one-man show, A Cherry Tree In The Bronx, and was set to unveil it Wednesday at the Barrow Street Theatre in New York City.

DeStefano had kicked heroin and lived for many years with HIV. He also had put together an all-star comedy special last year, Comics Anonymous, and was planning a tour for comics in recovery. At the end of that special, which aired on Comedy Central, the final end credit paid tribute to Greg Giraldo.

The last time I saw DeStefano was at the recent tribute fund-raiser for Giraldo at the Beacon Theatre. DeStefano busted my balls, but always with a smile. And he wanted me to see his new show. I'm devastated that I didn't ever get the chance. And even more so that everyone else didn't get a chance to see this man truly shine onstage.

UPDATED: Funeral arrangements and services are scheduled for friends and family, with wakes on Wednesday and Thursday, and the funeral on Friday. All services taking place in DeStefano's home neighborhood in the Bronx. If you're a friend of Mike's and need specifics, please contact me and I'll pass them along. UPDATED FURTHER: They've changed his web page to this graphic, with the funeral information. 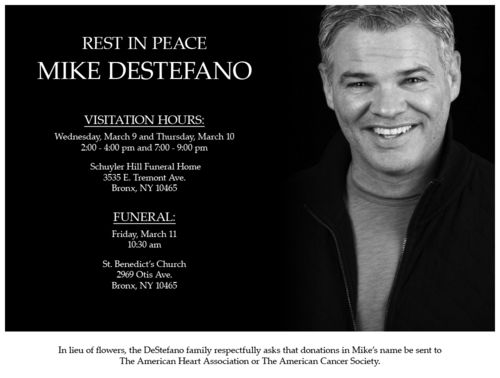 The DeStefano family thanks everyone for their kind words and support, and asks that in lieu of flowers, you make a donation in Mike's name to the American Heart Association.

You can read my 2010 interview with Mike DeStefano, and also hear DeStefano tell so much of his story to Marc Maron on his WTF podcast. I also sat down with Mike outside the Comedy Cellar days after the finale of Last Comic Standing.

The photo above was taken by Mindy Tucker on March 2, 2011, at the Bowery Poetry Club.