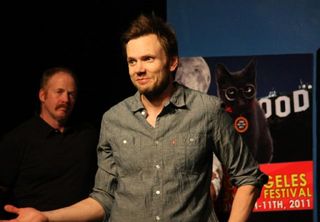 Joel McHale — who was a star of Seattle's TheatreSports before moving to L.A. — performed last night. Drew Carey is on the bill tonight with Armando. The Office's Angela Kinsey and Kate Flannery, plus Private Practice's Kate Walsh, sit in on Wednesday. Community's Danny Pudi, Jim Rash and Yvette Nicole Brown do it up on Thursday. Broken Lizard heightens the yes-anding on Friday. On Saturday, Jeffrey Tambor will receive the Del Close Lifetime Achievement Award, while Charna Halpern will be on hand to present the Del Close Advancement of Improvisation Award to Beer Shark Mice, and Adam Scott will show up to accept the Chris Farley Award.

So many opportunities to catch fun improv comedy. So don't block this suggestion. If you're in Los Angeles this week, just go. Buy a ticket. Sit down. Listen. Watch. Laugh.

From webseries to Comedy Central to Cannes: “Broad City” takes its success story to MIPTV