It's OK if it takes you a minute to figure out The Pajama Men. 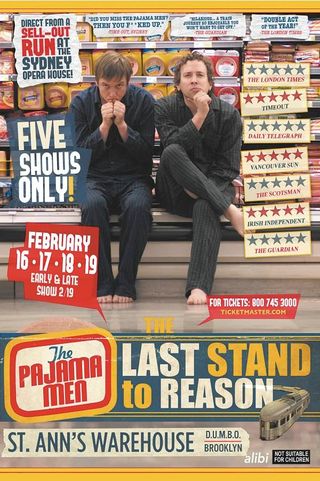 Yes, they are two men onstage in pajamas, and you get the gist of that straight away. But what is it exactly that Shenoah Allen and Mark Chavez are doing? It's not quite sketch. It's not quite improv. In the first minutes of "Last Stand to Reason," their production that earned them two 2010 Chortle Awards nominations, the duo weaves back and forth, swapping the character of a ticket-taker on a train ride with the dozens of passengers on it. For the next hour, Allen and Chavez continue on their quick pace through multiple narratives that intertwine, and every so often, they'll encounter a moment that even seems to surprise each other. It's in these playful moments that they're at their most enjoyable.

Like when Allen and Chavez are swapping secrets. Or when Chavez is showing off his skills shuffling a deck of cards. Or even when Allen finds himself saying the word "crisps" instead of chips.

After all, they've won big awards at the festivals in both Edinburgh and Melbourne, although the pair is neither British nor Australian. They're New Mexican. Go figure.

"Last Stand to Reason" became the highest-selling act ever last year at London's Soho Theatre. These two men from New Mexico in their pj's aren't going to set any new records this week with their first tip into the waters of New York City at St. Ann's Warehouse in DUMBO. But give them more than a minute to figure it out, and maybe someday they will.

Review: Kevin James, “Never Don’t Give Up,” on Netflix

One thought on “The Pajama Men in “Last Stand to Reason,” four nights only in Brooklyn”