Love comedy? Want to know where to find comedy at SXSW? For the first time in its 25 years, Austin's SXSW festival has included comedy across all three facets of the South by SouthWest festival, from Interactive through Film and Music, so you're just going to have to spend a few more days enjoying the best BBQ and friends than you were expecting.

‚ÄúStand-up comedy at SXSW touches on all the best things about our event,‚Äù says SXSW Managing Director Roland Swenson. ‚ÄúGreat comics are masters of live performance, the best story-tellers and pioneers in new media. We're incredibly proud that so many great comics choose to join us here.‚Äù

A conversation on the movie Super, with James Gunn, Rainn Wilson and Ellen Page

A conversation with Todd Phillips

A Conversation with Paul Reubens

The Female Funny: Is it different for girls?

How alternative comedy kings have met the masses 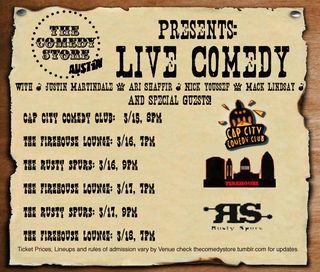 The Comedy Store is bringing in comedians from the store to perform mutiple nights as well (pictured at left).

Cap City Comedy Club has Paul Varghese headlining during the bulk of SXSW (March 16-19), with Alex Koll and Doug Mellard the week starting it March 9-12.

The SXSW film schedule also includes a documentary about Conan O'Brien's 2010 concert tour, a documentary of NYC's indie comedy scene — Tell Your Friends! The Movie — Mel Gibson as a ventriloquist in The Beaver, Paul, Dane Cook's new movie, and other selections.

Shoot the Messenger at 45 Bleecker