When Jennifer Aniston and Adam Sandler told Oprah Winfrey on her show yesterday about the time when Aniston turned down Lorne Michaels and the chance to join Saturday Night Live, more than a few people may have been more than a little shocked. Aniston? On SNL?

Now before you think this is some made-up story to help promote their upcoming movie: Just Go With It. Seriously. 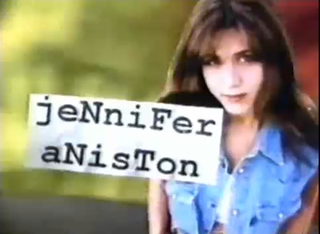 There's more than enough reason for Sandler to know not only who Aniston was in 1994, but also why he'd want her on his show. Because Aniston was 25 when Friends debuted in September 1994. And before that, she had performed sketch comedy on network TV in FOX's short-lived series, The Edge, which aired during the 1992-93 season. The Edge may not have had the staying power of In Living Color, but it did boast plenty of names of people you know today.

MTV's Julie Brown was nominally the host, Edd Hall provided voiceovers, Bill Plympton provided animation sequences between sketches, and the cast included, in addition to Aniston: Wayne Knight (who went on to mess up Jurassic Park and torment Seinfeld as "Newman!"), Paul Feig (who went on to create Freaks and Geeks), Jill Talley and Tom Kenny (who later married, with future successes on Mr. Show and SpongeBob SquarePants), Rick Overton, and Alan Ruck! Kevin Nealon even somehow ended up in a couple of episodes while still on SNL?! And the show's creator David Mirkin, went on to show-run The Simpsons from 1993-95.

But what about Aniston as sketch comedian? Here's a look at the start of one episode, in which Aniston voices the butt of Goldie Hawn (as well providing said rear end?), then plays a Guns N' Roses groupie with Brown spouting that classic movie line, "A dingo ate my baby," then the victim of a practical joke:

And here she is in a bikini for a Sports Illustrated spoof:

So, knowing what we know now about the 1994-95 season of SNL — it's generally considered one of the weakest seasons — Aniston certainly made a wise career move at the time. Although can you imagine what that season may have been with her? Hmmmmm…..

Parks and Recreation’s special Halloween PSA, for the kids

A moment for Bernie Brillstein

2 thoughts on “Jennifer Aniston on “The Edge,” her TV sketch comedy show before turning down SNL for “Friends””