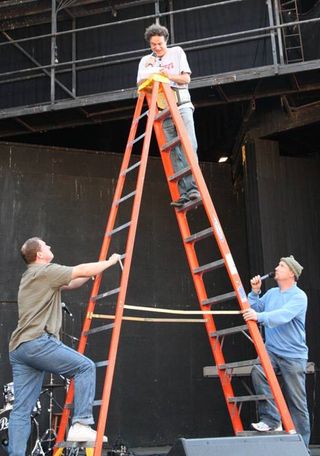 UCB original Matt Besser isn't listed in either of these record databases, although he claims to own several comedy records already. Among them: Most jokes told in a minute, most characters in five minutes, and world's tallest joke (see him on a ladder with fellow UCBers Matt Walsh and Ian Roberts supporting Besser? Yep).

Now comes his latest stunt: For the next ten consecutive Tuesday night performances of Comedy Death-Ray at the UCB Theatre in Los Angeles, Besser will attempt to establish a record for most original characters attempted in consecutive weeks at a Comedy Death-Ray show. You see what he's doing here?

As Adam Sandler's new movie begs you, just go with it.

From CDR's Scott Auckerman: ‚ÄúI‚Äôve seen a comedian do ten characters before, but usually that is over a period of years, sometimes decades. To be honest, I don‚Äôt think he‚Äôll be able to do it, but we‚Äôre willing to give him the stage to try. If he crashes and burns, then that will be entertaining too.‚Äù

For his part, Besser says his character parade will include already-popular versions of the Pope and Bjork, but also introduce several new people to laugh along with. ‚ÄúIf any of my characters don‚Äôt work,‚Äù says Besser, ‚Äúthen the character won‚Äôt count. But I won‚Äôt fail. I will take the comedy record away from the Soviets, and bring it back to the USA.‚Äù