Fun Fact: Sheng Wang was the inspiration for the launch of the "Meet Me In New York" series! When I saw Wang in NYC in the fall of 2009 and learned he had made the move here, I realized that I needed to have a way to spotlight so many of the comedians who come to the big city but may not be making headlines everyday to otherwise cover. Of course, Sheng Wang has made plenty of news recently — winning NBC Universal's seventh annual Stand-Up For Diversity competition and earning a one-year holding deal with the networks. And this Friday, his first half-hour Comedy Central Presents debuts on Comedy Central. Let's get to know a little bit more about him. Cue the Q&A! 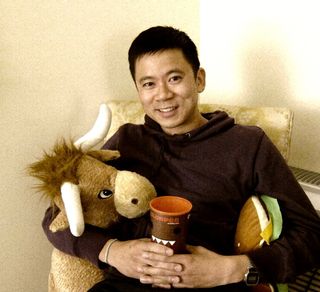 Name: Sheng Wang
Arrival date: Sept. 1, 2009
Arrived from: San Francisco (although I spent two transitional years in LA before arriving in NYC).
When and where did you start performing comedy? In the summer of 2002, I took a joke-writing class that culminated with a showcase to which you invited all your buddies. With friendships on the line, my set went pretty well, and I was emboldened to explore the bustling comedy scene in San Francisco. My first set actual set at an open mic was near the end of the night at a laundromat/cafe called the Brainwash. It was a sobering experience with lots of painful silences. But I made friends with comics already entrenched in the community, and they encouraged me to keep at it. It was a great scene with crazy characters and a number of rooms where anyone could sign up and get stage time throughout the week. Once I saw a guy smoke crack on stage and strapped what looked like a homemade bomb onto his chest. Comedians started barreling for the exits. I stayed seated and stoned. Apparently, it was just a "joke."
What was your best credit before moving here? Live at Gotham

Why did you pick NYC over LA or anywhere else?  The traffic in LA is a heartbreaker. I realized that I was getting too comfortable with the culture and the pace of life in the West Coast and wanted a change of scenery to shake things up for myself. I love the conveniences of living in a city where you always have access to cool things happening and you don't have to do some drunk driving at the end of the night. Plus, sometimes when you happen to line up a string of road gigs, you find yourself spending only a few days out of the month actually at home. Given the higher density and late night nature of life in New York, I figured that a few days in NYC goes further than a few days in LA.

How long did it take to get your first paid gig in NYC after moving here? I forget…but I wasn't eager to get paid as much as I was just trying to situated in my new environment.

How is this scene better/same/worse than the scene you moved from? New York is a much bigger standup comedy scene. There's so many different groups within it with various comedians who've been working for a number of years and yet have never met each other. The pool of talent is so deep it helps keep me on my toes and inspired to work harder.

Do you already have an "only in New York City" moment yet? Once after a long night of drinking, two friends and I ended up hanging out on the fire escape of my buddy's fourth-floor apartment. Suddenly, a random Rastafarian street dude, through an impressive display of acrobatics, climbed up the fire escape from the sidewalk and insisted on partying with us. However, he instantly started acting like a jerk and made stern demands for alcohol, smokes, and other party implements. When we made it clear that he wasn't welcome, he grew increasingly aggressive and hostile. I kept trying to keep things peaceful by saying the word, "Respect," like I was Ali G. After repeated requests for him to leave, he finally agreed, but only on the condition that he departs through the apartment door. At a loss for any alternatives in our drunken state, we let him climb through the window and into the apartment. It was a bad idea. He immediately fell off the sill and crushed the fan my friend had just recently purchased to battle the summer heat on a budget. I escorted him out the door armed with my litany of "Respect." We turned the AC on and passed out with the windows locked.

What tip would you give to any comedian who moves here? Do as many mics as possible. Take advantage of the talent here…watch the pros at the shows and learn. Stay humble and hungry. Be nice.

Where do you see yourself five years from now? Writing better jokes. Maybe doing a cross country tour using locomotives and my bicycle.

Here's a clip from his Comedy Central Presents that actually won't air on the TV. Thank goodness for Internet! Is it because he says the word "poppy seed"? Maybe it's because he jokes about smoking pot and giving himself tasks to accomplish. Roll the clip!

And here's his comedy guarantee:

2 thoughts on “Meet Me In New York: Sheng Wang”