A lot has changed in Colin Quinn's latest one-man show since I first saw him workshop it under a different name ("The Fall of it All") months ago in the basement lounge of Gotham Comedy Club. 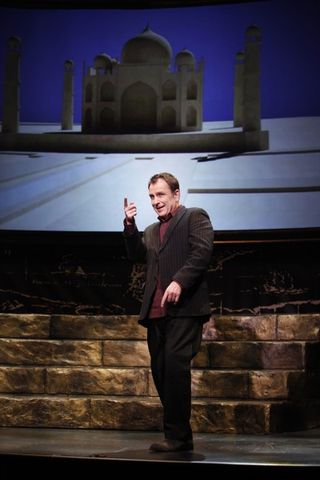 Inside the Helen Hayes Theatre, "Long Story Short" now boasts a set design resembling a Greco-Roman amphitheater, with a giant monitor screen that can illuminate and animate the empires of our past. Musical notes and quick black-outs break up the show into multiple vignettes, each one giving Quinn a chance to tackle a particular empire, how it rose and why it fell. But the biggest difference between what Quinn began with and what he presents now for a limited engagement on Broadway is jokes. Lots and lots of jokes.

That's perhaps the one thing that lets you know that Jerry Seinfeld had a hand in the production as Quinn's director.

Opening Night audience members got to see Seinfeld onstage to take a bow with Quinn. But it's his unseen guidance which allows Quinn to tighten up his message, to pack and pepper his 75-minute with as many jokes as a monologue about how our very world around us today is crumbling could allow.

Because that's a difficult message for audiences to hear. Just as the Greeks, the Romans and the Brits saw their hold over the world slip out of their grasps, so it is our time now as an American superpower to realize we may not be as super as we once were. The underlying theme of Quinn's message is presented at the top: "With all of our progress, where is the progress?"

As he tours the history of the world — albeit not in strict chronological order, he manages to hit all of the continents in due time — Quinn shows us once more how the more things change, the more human behavior stays the same.

No matter your political persuasion, by the end of his set, as Quinn describes our place in the world as if the nations were all late-night patrons in a bar, you'll be persuaded that we might want to watch our step before we become the next victim to history.

It's a very timely and very funny message that all Americans need to hear.

Related: Watch highlights from opening night of Colin Quinn's Long Story Short, including before and after messages from his famous friends.

Review: Tiffany Haddish, “She Ready! From the Hood to Hollywood!” on Showtime