I don't know if you can ever have too many stars on a benefit show, but Comedy Central certainly tries every two years on behalf of autism research with its Night of Too Many Stars: An Overbooked Concert for Autism Education, which airs again tonight.

As for the show itself, I saw it, so I can tell you what you may see, unless they decide to edit it out.

You may or may not see Tina Fey joke about wanting to say hi to her family, then realizing the show is airing on Thursday night, when 30 Rock is on, adding: "Who am I kidding, they're watching Shit My Dad Says on the DVR." Here she is with Stewart showing off her 2011 Tina Fey Swimsuit Calendar:

You may or may not see Ricky Gervais make the audience gasp with a DUI joke that also includes a rape! Here is joking about his history of charitable giving, including the time he was given the gift of a goat. An African goat. Roll it.

You may or may not see Tracy Morgan awkwardly work with Stewart through a sketch about how big his pockets were.

You may or may not see Stephen Colbert and Steve Carell sing a novelty song that's only about 19 months too late, including the re-appearance of Tay Zonday. If you were around 19 months ago, that name might make more sense. But probably not.

You may or may not see Jim Gaffigan kill with his new material about McDonald's.

You may or may not see Tom Brokaw delivering news headlines. Just like old times.

You may or may not see Jimmy Fallon serenade Tommy Hilfiger, mostly but completely against his will, with lyrics from The Who's "Tommy." No, you will see that. Look for one of Fallon's "Late Night" writers to lend a hand.

You may or may not see someone joke about an auction for meeting George Clooney by saying: "It's George fucking Clooney. Normally you'd have to be a stripper or an Italian model to meet him." Cost: $20,000

You may or may not see Sarah Silverman kiss Leonard Maltin, upon winning a fake award, and then thank Maltin again onstage by saying: "Richard Roeper cannot hold a candle to you as a film critic, or as an oral lover…seriously, he's a dead fish."

You may or may not see David Letterman appear and ask how many Emmy Awards he'll need to give Jon Stewart to make him go away.

You may or may not see Chris Rock curse out a woman's ex-boyfriend over the phone. It helps if you say your name is Chris Rock.

You may or may not see Steve Carell knowingly hold Naomi Watt's hand while simulating an orgasm, as well as another woman, who may or may not have been Will Sasso's date. Watch carefully. I like how New Yorkers can be so New York in not acknowledging celebrities.

You may or may not see Triumph the Insult Comic Dog, aka Robert Smigel — aka the guy who helped make this all happen — joking about other celebrity charities. Roll it!

You may or may not also see Lewis Black talk about the experience of following Vince Gill and Amy Grant at a different event.

You may or may not also see a video from Adam Sandler in which he gets way too graphic with a human anatomy book.

You may or may not also see Robin Williams interrupt an auction in progress.

And finally, but certainly not last nor least, you may or may not see Paul Simon harmonize with Chris Rock and Tracy Morgan. Here's what that looks like! 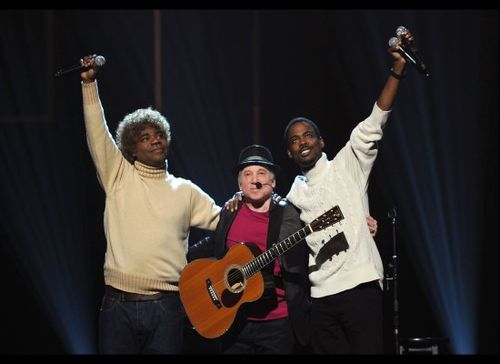 You still can donate to help fund autism research, via comedycentral.com/stars.

An eBay auction continues through Oct. 25, including: a copy of Sarah Palin‚Äôs autobiography signed by Tina Fey; a box of Thank You cards signed by Late Night host Jimmy Fallon; Hot Pockets box signed by Jim Gaffigan and a souvenir t-shirt; a canned ham signed by Late Show host David Letterman; and a copy of our nation‚Äôs Declaration of Independence signed by Stephen Colbert.

All donations of $75 or more will receive a White Castle-scented candle and all donations of $100 or more will get a 2011 Tina Fey swimsuit calendar in addition to the candle. Also, a $10 donation can be made by texting STARS to 90999 (message and data rates may apply).

This is how Conan O’Brien opened his tenure on TBS: Previously on “Conan,” the cold open video

List of winners of the 6th Annual ECNY Awards

Michael & Michael Have Issues to blog