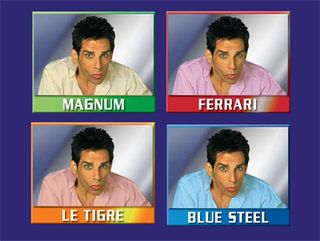 A Zoolander sequel has been in the works and/or rumored for the past few years, but this isn't going to be that. Rather, Stiller will voice the male model again in an animated Web series. By going to short films, it's a return to the origin of the character, created as a spoof for VH1's Fashion Awards in 1996 and 1997.

Stiller told The New York Times' Dave Itzkoff that doing shorts allows them to get the project back in the public eye quicker and easier than fighting over big budgets with the studio for months. Stiller hoped to have the film's other cast members (Owen Wilson, Will Ferrell, among them) also provide voices for the toon. ‚ÄúYou don‚Äôt want to have the guy who did the Hanna-Barbera cartoons come and do the voices,‚Äù Stiller said. ‚ÄúNo offense to the Hanna-Barbera cartoons ‚Äì I‚Äôm a huge Scooby-Doo fan.‚Äù

In a second deal with Paramount Digital, Stiller also will be heading up a separate live-action Web series called ‚ÄúBilly Glimmer,‚Äù in which he stars as a Las Vegas impersonator. Human Giant's writer/director Jason Woliner will direct those shorts, with fellow Human Giant vet Rob Huebel co-starring.

When the exec. producer of “Bad Lieutenant” makes a film with a comedian as a rave DJ: “Happy Life”