If you watched the series debut last night of TV Land's Harry Loves Lisa — and why would you have, really? Really. This show is merely the latest in a continuing trend of celebrities letting TV crews into their homes and lives, all in the hopes of rejuvenating their celebrity. Which normally takes hold in something like another reality competition, a celebrity tabloid correspondent gig, or even actual roles in which the actors act. Except in this case, Harry Hamlin and Lisa Rinna already have cashed in their reality competition cards, both having been there and done that on Dancing with the Stars. 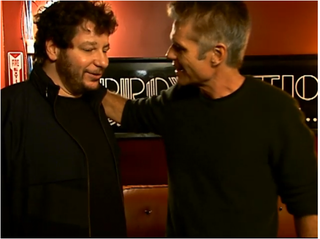 So we are left with other plot contrivances in Harry Loves Lisa, and the first one cuts close to the comedy bone, as Harry Hamlin's acting coach and manager sign him up for a Friday-night slot at the Hollywood Improv. Hamlin had never attempted stand-up before. Note to aspiring comedians: You cannot just have someone call up the Improv and get you on the 8:30 p.m. Friday show. But if you were People mag's "Sexiest Man Alive" in 1987, you just may be in luck!

OK. Here's what else we learned in the episode.

1) Hamlin's wife and supposed managers remind him constantly of his bad acting audition, reinforcing the notion that he "freaks everyone out" with his line readings. This was, for all intents and purposes, the plot point by which the suggestion came forth for him to let loose and try to be fun for a change.

2) Hamlin is poker buddies with Robert Wuhl. Wuhl tells him he will bomb: "This will be the longest four minutes of your life."

4) Jeffrey Ross asks Hamlin backstage what his opener and closer are, and ribs him gently by saying his wardrobe looks like it came from Forever 41. And still, Hamlin wears a giant scarf around his neck.

5) Mike Bridenstine, as the show's MC, is not billed.

6) Instead of telling dirty jokes about condoms, Hamlin's entire set seems built around gay sex. The part we see on TV is about Hamlin showing his privates to get a part in a play. The part we didn't see on TV, well, is right here. Roll the clip!

Well, it's the little victories. You can watch the full episode, called "Comedy Club," here.