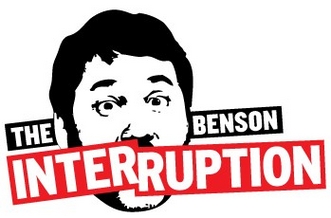 Comedy Central has announced the impending arrival of the televised version of the live show, The Benson Interruption, with a six-episode run beginning at midnight Thursday, Oct. 28.

For those of you unfamiliar with the show and/or concept, stand-up comedian Doug Benson hosts a show with his comedian friends, and as they perform, he sits onstage and interrupts them. Not rudely. Just to change the flow of the conversation, and therefore, the comedy. Benson already has been doing this for years.

"Usually bad manners are annoying but, fortunately for us, Doug Benson has managed to turn his socially unacceptable behavior into a funny and enjoyable weapon," said Kent Alterman, Comedy Central's head of original programming.

Benson added in a press release: "It's not heckling, it's helping. There's a major difference. Well, just a few letters, but you know what I mean. All of the comics on the show are friends of mine. I'm not interrupting strangers. They are well aware of what they are getting into when they agree to do the show. I hope."

Tapings begin Oct. 11 at The Music Box in Hollywood, Calif. Tickets are available for all six episodes.

Conan heading back to NYC for shows Halloween week 2016