If you've been to New York Magazine's Vulture section recently, you've noticed they redesigned it to look like its very own section that lessens the direct connection to NYC and plays up the coverage of culture (they've even acquired the vulture.com domain name, which redirects to the magazine's site). More importantly, perhaps for comedy fans, you may have noticed also that Vulture has gotten the jump on other mainstream press outlets with exclusives from the comedy kids so cool at NBC that they've been bumped off to the side or off the network entirely. 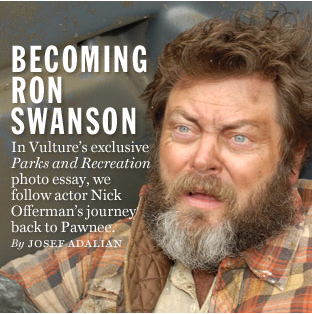 Vulture got the initial official leak on Conan O'Brien's announcement that his new TBS show would be called Conan (or is it CONAN)? Now, today, they've got a special weekly deal with the folks at Parks and Recreation, which still for reasons unknown isn't coming back to NBC until midseason. I say they have a deal, but really, if you look at the byline, you can see they is a he, and he is Josef Adalian, whom Vulture recently lured away from The Wrap, which itself had only last summer lured away from his post at TV Week. The guy's got some good connections.

Anyhow. Here is the introduction to the new weekly NBC/P&R/Vulture feature. Although judging from the teaser pic on the front of NYMag.com, some people might think that's "Becoming Zach Galifianakis' older brother" instead, am I right, or am I just too close to Hollywood right now to think clearly? Wait. Those might not be mutually exclusive things.

Roll the clip (and click on their slideshow — slideshow = link-bait!) :