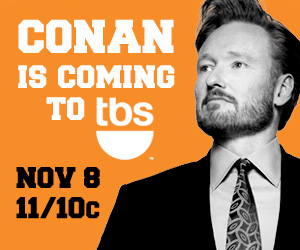 Despite what the folks at The Hollywood Reporter say, or my best intentions to get Conan O'Brien to name his new show Team CoCo A GoGo, the talk-show host's new talk show on TBS will be called exactly what the ads already have been calling it.

If that doesn't tell you already, well, here's Conan himself telling you the news. Which, of course, isn't news, since the ads already told you the title.

And no, it's not really going to be called "Conaw." Roll it!