Looking for a new way to celebrate New Year's Eve that involves Times Square but does not have to involve too much Ryan Seacrest and/or Kathy Griffin and/or Griffin making jokes about Seacrest and Anderson Cooper? Turns out the folks at the Times Square Alliance have decided to put on their first-ever streaming Webcast from their central midtown Manhattan location for six-and-a-half hours on Dec. 31, starting at 5:50 p.m. Eastern and continuing until 12:20 a.m. on Jan. 1, 2010. You can get more information as well as a widget to catch the action on the Times Square 2010 New Year's Eve page. 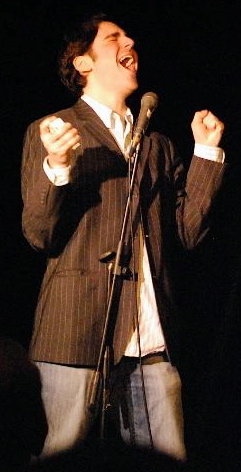 They'll have five co-hosts and a team of bloggers on-site, and one of the co-hosts is a young stand-up comedian named Harrison Greenbaum. This is not the photo of him hearing the news, but you can imagine his excitement. Actually, you don't have to imagine his excitement, because I've asked him about his new gig. Tell 'em, Harrison!

So, tell me about your new New Year's Eve gig! I'm actually one of five co-hosts, as opposed to one of the bloggers. I'll be broadcasting live from Times Square for over 6 hours, from the ball being lifted at 6 PM to post-ball drop at 12:30 AM. As a co-host, I'll have my own camera crew, field producer, and security guard and will be at different places in Times Square throughout the night. The bloggers, on the other hand, will be blogging and Tweeting from within the Hard Rock Cafe, screencapping the live broadcast and supplementing our live broadcast that we'll be doing live outside.

Who are the other co-hosts? I'm the only male co-host — the other four co-hosts are female. I haven't met them yet (except for two of them, who I met very briefly at the callback); we have our first rehearsal on Monday. As far as I know, though, I am the only one with a comedy background and definitely the only stand-up comedian in the group.

How did you get selected? Was this because of your role in producing and promoting shows at the Sage Theater? There was a three-part process for being selected: there was the initial submission, followed by an audition, followed by a callback. (The audition and callback were really fun, consisting mostly of improv based on situations that we as co-hosts will be involved with during the broadcast — for example, "This guy will be playing a drunk reveler. Interact with him for 2 minutes. And, GO!" We even got to do a mock countdown!) I did have my show at the Sage Theater on my resume, but it didn't have any influence or effect on my getting cast.

And how does this New Year's Eve compare with your experience last Dec. 31, or any previous one for that matter? Last New Year's Eve, I was at a friend's party, trying to take it as easy as one can on New Year's, since I had six shows scheduled for the next night. Having six shows on Jan. 1 turned out to be an accurate indicator of how busy I ended up being for the rest of 2009 — I'll have done close to 730 shows by year's end. So I hope that being part of the first-ever world-wide webcast from Times Square will be as accurate an indicator of the kind of stuff I have to look forward to doing in 2010!

Here's what the Times Square 2010 New Year's Eve video player looks like — without added chat boxes for Twitter and Facebook folks. You can go to the page highlighted at the top of this post and grab yourself the appropriate widget.