Mark Malkoff has generated plenty of attention before with his sociological stunts — in January, I wrote about his attempt to traverse Manhattan from south to north only through the kindness of strangers carrying him along the way. Previously, Malkoff has visited and consumed purchases at all 171 Starbucks locations in Manhattan within 24 hours, lived in an IKEA in New Jersey for a week, and spent a whole month on an AirTrans Airways plane to get over his fear of flying. 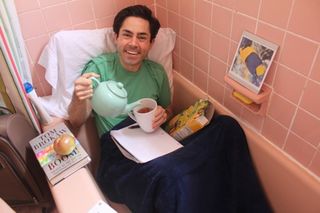 For his first achievement on his own channel on My Damn Channel, Malkoff is attempting something simpler, yet perhaps more difficult in this day and age, particularly for someone with an Internet channel. About an hour ago, he entered his own bathroom, and plans to stay in there until 10 a.m. Saturday. No Internet. No email. No Facebook. No Twitter. And also: No TV. No laptop. No iPhone. No news sites. At least he has his bathroom, right? He also has his wife, Christine, who can relay emergency messages to him, but also, I suppose, tempt him with information from the world outside of the bathroom.

Mark tells me he compiled a to-do list of things he has been putting off, that now, finally, he may be able to accomplish during a five-day stint in his bathroom. He wrote to me before entering his sanctuary: "A few of the things include memorizing the location of every country in the world, learning how to play ‚ÄúEvery Rose Has It‚Äôs Thorn‚Äù on guitar, reading ‚ÄúGravity‚Äôs Rainbow‚Äù, and writing a love letter to his wife."

This is the first of several stunts he has planned for the site. Malkoff told me he'll try to do one big thing a month. You can see video of his past experiments on the Mark Malkoff channel on My Damn Channel.

Here is a short promo he filmed before starting. The final results should appear on the site Sept. 8.

These comedians dressed up (or down) for Halloween. How about you?