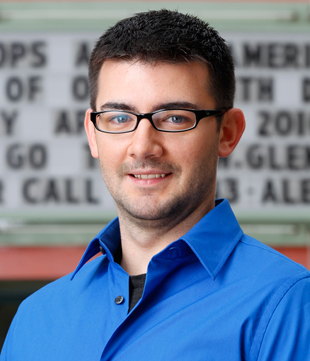 In it to win it until the final minutes, Tommy Johnagin was the runner-up in the seventh season of NBC's Last Comic Standing. Johnagin, with two appearances on Letterman under his belt as well as a half-hour Comedy Central special before entering the competition, will not have to be put on Suicide Watch. At least that's what he told me when I called him last night and pretended to be Barry Katz, interrupting Johnagin's pre-show meal of chicken fingers at the Funny Bone in Omaha. Fun facts! Want more?

This is his exit interview.

Tell me about the first time you did stand-up: Open mic when I was 18 and an hour-and-a-half from home. I talked about Siamese twins. Exactly as funny as it sound.

Did you audition for Last Comic Standing before, and if so, how did that/those experiences go? I auditioned three years ago and made the semi-finals. It was a great experience and I'm glad I didn't make the finals until this year

If you said yes, then what did you learn from your past experiences that helped you move further in the competition this year? I learned how to lose. The most helpful thing was knowing how awkward the first audition in front of the judges would be.

When did you think you had a serious chance of winning this thing? I felt good the day I auditioned.

How did you feel about the format changes in the contest this season, and was there anything from the old formats that you missed? I thought pretty much every change they made was for the better

Did you have previous experience with comedy competitions, and how did LCS compare to those? I don't have much competition experience.

Have people (civilians, comedians or industry) already started treating you differently? People recognize me more which is nice but I feel like I'm being treated the same as before the show.

Do you have any funny moments that happened behind the scenes of the show that you can share? We had an Xbox in the green room and someone hid the controls like we were children. Myq and I had a good time with that.

What are you most looking forward to about touring for the next several months with the other finalists? Banging chicks. Just kidding. I like the tour bus idea and I think it'll be fun to hang with the other comics in different cities.