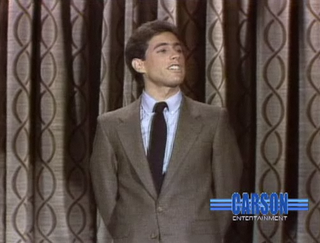 If you go to JohnnyCarson.com today, you'll find a number of clips from the glory years of The Tonight Show, including classic comedy clips featuring the debuts of Jerry Seinfeld and Steven Wright, performances by Rodney Dangerfield and a 1977 performance by Jay Leno.

Nothing is available to embed here, so you'll have to go there to see it. And it's all part of the efforts of Carson Entertainment Group to put whatever footage still exists from the Carson years (some years got erased from film due to human error) online for people of this century to access whenever they like. Friend of the site Dave Itzkoff at some publication that prints on paper called The New York Times talked to the Carson Entertainment Group about their project. The head of the group, Itzkoff notes, is Johnny's nephew. According to that story, expect to see a DVD collection for sale later this year.