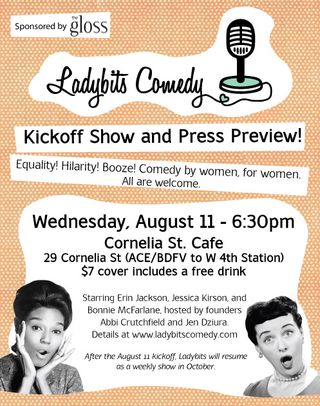 Conventional wisdom says it's tougher out there for a woman in stand-up comedy, and Abbi Crutchfield and Jen Dziura want to make it less tough — or at least as tough for a woman as it is for a man. You know how Secret deodorant is strong enough for a man but made for a woman? That's what Ladybits comedy is.

They're having their preview show tonight (see the flyer), and launching a weekly series in October.

I do know that NYC had a regular show for a few years called Chicks and Giggles. Ladybits picks up where that left off, but hopes to do more. Since I'm a man with man parts, let me let the women explain what their vision is for Ladybits. They have a vision statement, an apprentice program for women thinking about starting a career in comedy, and a "token male" program to book one guy on each show. Here is their vision statement: