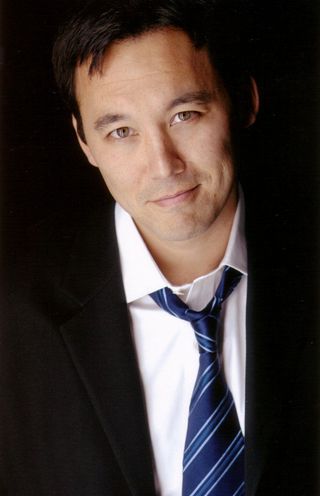 In his new special, "The Byrne Identity" (debuting July 25 on Comedy Central, out July 27 on DVD), comedian Steve Byrne says that his own identity is a blend of Korean and Irish, but when he went to China: "They thought I was Chinese. Even they couldn't tell the difference." Rim shot!

But seriously, folks. Steve Byrne talks a lot about personal identities in his stand-up special, from how a person can find their identity based solely on a single incident — whether you're O.J. Simpson or the guy who poops his pants at an office party — to how you never hear anyone refer to anyone as an African-Canadian, and how TV only seems to speak to us as a collective audience in terms of black or white, despite being in color.

Byrne spoke with me earlier this week and had some things to say about finding his own comedic identity, how he had a WTF moment reacting to the WTF podcast that questioned his comedic identity, and more. Before we get into it, here's a quick clip from "The Byrne Identity." Roll it:

When did you find your own identity? "When the half-hour came out, 'Happy Hour' came out, they did well, they sold well, and I thought maybe I needed to do something more. I said, 'There's nothing in it that people can realate to.' I gotta ask myself, 'Who am I and how can people relate to me? My identity is wrapped up in being Korean and Irish, and I didn't want to choose a side. There's a lot of comics who want to choose a side, and maybe they're German but they decide to be Mexican, like Carlos (Mencia). When I'd be in shows, I'd ask people in the front row who are they, and they couldn't answer…"

"One of the fun bits I had was walking into a music store and just picking up CDs and riffing on every genre in the store. I'd heard people make fun of goth music or country. I'd never heard anybody do all the forms of music and just tag it, so i had a lot of fun with that."

"I really, I was doing an interview with a guy from Sirius Satellite, one of the channels, he gave me a great compliment. He said you did a direct left turn and ditched your whole act and became better. I ditched my own energetic and animated self, and I feel like that makes up for a lack of material. I'm really happy about the jokes."

Speaking of changing identities and ditching energy and whatnot, did you happen to hear Dane Cook mention your name in his recent WTFpodcast interview with Marc Maron?

"I did listen to that. This is the thing. This is a thing that has been passed around to the comedy community for years. If they're freinds of mine, I tell them but usually, I fluff it off. But suddenly, I get all of these comments on my Facebook or emails, and I thought where is this coming from? I was infuriated when I heard (Cook's) perception of the events of that day. I know exactly what happened that day. There were a lot more elements to that story that were meant to derail my efforts as a comic in Los Angeles. I contacted Maron. To put it bluntly, I was infuriated. I consider it a bold-faced lie. So I'm going to go on Maron's podcast on the 16th and give the truthful side of the story. I don't want to get into too much detail. But I was over the moon. I was shocked. You'd think after all these years. It's something where I think he tried to do some things to me when I first started out in Los Angeles. It just made me want to work harder…you either have to pack it up and say the hell with it or dig in and work harder. It's something that happened years ago that I had put to bed and I wasn't bothered with it."

Did you start out in comedy in your native Pittsburgh, or after that? "I never did stand-up in Pittsburgh. I started comedy in New York City. I ended up getting a job at a comedy club in New York, answering the phone and sweeping the floor. I saw these comedians doing it and thought that was a blast, and I started doing it, and 12 years later, here I am." What club was it? "Carolines." Do you go back there often? "I haven't walked in there in about seven or eight years. I don't appreciate them, to put it mildly." Was it something or someone specifically? "There was a mnanger there that just treated me like a piece of shit."

OK. Let's lighten things up with another clip from "The Byrne Identity," in which Byrne explains why Snow White's seven dwarves wouldn't work today. Roll it!

I just got back from Montreal, where audiences there love the ethnic-themed shows. I know some other clubs do segregated themes such as Chocolate Sundays or whatnot, and you've toured under an Asian banner of "Kims of Comedy." What's your thought on ethnic comedy shows? "There is lterally a section of the community that wants their own voice and wants to hear things they can relate to. I didn't want to fall in that hole and become that kind of comic. I wanted to relate to everybody. That's ultimately what I want at my shows is just everybody, not just one group."

On your credits list, it seems as though you work in a lot of projects with Vince Vaughn. Are you guys good buddies? Same agent? Lovers? Kidding. "We've been great friends for a while now, after he did the Wild West Comedy Show, one of the guys got sick and I jumped in for him after they filmed the movie. He's been very supportive of my stand-up.
We're actually doing a show in chicago with Bill Burr and Kevin James." That happens this Friday at Park West in Chicago.

What else should fans know about your DVD, since Comedy Central will only show 42 minutes of it? "This special is 73 minutes long. On my live shows, I've created this band called Sausage Party. I bring guys onstage, it's a lot of fun, Bobby Lee makes a guest appearance in the boy band. There's two or three sketches that we filmed, one of thems funny, another one's not. You leave it in the hands of other people and hope that everything turns out OK. Thank God the special's funny enough."

Speaking of sausage parties, here's a new video of Steve Byrne and Owen Benjamin doing their cover of the LFO song, "Summer Girls." Roll it.

From Bang-Bang to the Burbs and back again to Bam Bam: Robert Kelly talks Live at the Village Underground, his new Comedy Central hour

Looking back at Sam Seder’s movie about pilot season, “Who’s the Caboose?” (Now out on DVD)

Interview: Anjelah Johnson is a good Christian girl who got big in comedy by going viral. Now what?