Hey, readers! Look what I found. My old digital audio recorder turned up, and when I replaced the batteries, I discovered audio clips of all sorts of funny people talking in my proximity from years gone by (still have audio from George Carlin, Ricky Gervais, Dane Cook, and some young ladies that I must have chatted up in a blaze of glory at an Aspen afterparty!). Which, speaking of yesterday was supposedly National Hangover Day, and I don't know if you "celebrated" it appropriately or not, but it reminded me that I had met The Hangover's director, Todd Phillips, on a hotel rooftop for a one-on-one chat in Montreal last summer during the 2009 Just For Laughs fest. I had talked to him a few years ago when I was a newspaper reporter in Boston and he was helming School for Scoundrels. He casted several up-and-coming comedians in that film, and also put a bunch of stand-up and improv guys in The Hangover, too. Let's talk about it. Oh, we did! 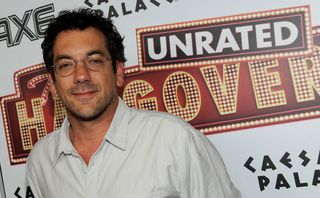 You're able to get a lot of true comedians in your movies. I'd like to get more credit for that (laughs). No. I'm teasing. I think if you look at all of my movies. This is my fifth movie. And you really break down how many actual stand-up comics that I've employed, because I support so much stand-up comedy, because I love comics and what they do, and I love their struggles so much, that to me it's important that, ok, I have this five-line part, and I could you know, audition all these actors and people that get shots at soap operas and, you know, beer commercials and all this, or I can go to Todd Barry, who's like a fucking great stand-up comic who I've loved forever and give him a shot. And I've always done that, because A) I love having funny people around, but B) I also just like to support that community. I think it's so important.

Do you feel like other directors or studios have a stigma against stand-ups?

No. No. I don't think they have a stigma. I just don't think they're aware of it as much. You know what I mean? Judd Apatow certainly is. But I don't think a lot of the other comedy directors come from where we come from — me and Judd — as far as fans of stand-up comedy and knowing all these acts, and knowing how talented all these guys are. I go to the Upright Citizens Brigade Theatre every week, you know. I just look at these new guys all the time. And yeah, I'm looking because I want to laugh, but I'm also looking to say, this guy can do a two-day part in the next movie, so then, when you reach a certain level, and you're able to really give a shot to Zach Galifianakis in a starring capacity, it's the greatest feeling in the world, you know? There's 10 guys in Hollywood that we all know could have played that part. Not necessarily as uniquely as Zach. But could have done that part. That were on those lists that people put together. And it's like, no, man. Let's go to Zach. He's the funniest motherfucker out there, just nobody knows.

Did you have any fights with the studio over casting, in that respect?

No. With The Hangover in particular, it was, if I could keep the budget at a certain amount, I've done enough movies, and they've been successful enough, where, they said, hey, you can cast whomever you want if you keep it at a certain number. So I was very adamant about, on the crew, and on our side, about keeping that number down, and being able to use Ed Helms, and Zach and Bradley Cooper.

So that helps the comedy community in a way, too, I suppose? The studios want to keep the budgets down and comedians are more likely to be cheaper.

They are, because they're not known entities. You look at a guy like Matt Walsh. He's in every one of my movies. He's in all five of my movies. Bryan Callen is in most of my movies. I go back to these stand-ups because I know A) they love the work, and B) they're going to deliver every time. They're going to take whatever we have on the page — they're just additive. You know, a lot of times, an actor's an actor. An actor reads lines. They make it their own and they're wonderful, but a comedian can be so additive in so many other ways, that a lot of people don't think of.

For The Hangover, Zach was so great, and everyone is acknowledging this, how he owned every scene he was in. Is that something that those other nine actors on "those lists" would have done?

Yeah, I don't mean to say they can't, that no one else can do it. I just mean, why not introduce a new face? I think there's an excitement to an audience, I mean, I think we've seen in comedies the past few years, it's been the same eight guys. And. Yeah, it's different scenarios, but it's the same eight faces. There's something exciting about The Hangover — you don't know these people, so they bring no baggage, so the audience is on their side right away. I mean, I love Ben Stiller. But I'm telling you, I've made movies with Ben Stiller. It takes the audience 10 minutes to get on his side every time, because they're bringing baggage from other movies. That's not Ben's fault. Do you know what I mean? It's just the way they're defining it. So there's something really fresh about using guys that nobody knows, because, when you go and see a Ben Stiller movie, this is how you go, 'Alright, show me what you can do now.' And when you go and see The Hangover with these guys you've never heard of, it's more like, 'Hey, who are these guys?' Your eyes are open.

Do you think Judd Apatow faces that same kind of issue by using the same crew over and over?

Judd has kind of formed his own repertoire, so it's special in its own way. I'm talking more about guys who might take guys from that zone, or like…all you are as a director, whether it's comedies or drama, is a point of view. And I think casting is such a big part of your point of view, of what your own point of view is in a movie. I think Judd has his own thing because he has his own repertoire. It's not his fault they became huge, because he helped them get there, and I think that's his thing, and it's great. I'm just saying it's better to be ahead of the curve and than behind it, that's all. I don't want to talk bad about anybody.

Speaking of Judd, he came to Montreal last year (2008) and received a big award, then went ahead and made a huge love-letter to comedy with his next movie with Funny People. What does that mean you're going to do in 2010 after getting an award here?

IMDB has like 12 different things listed as your next project.

Yeah, well, you guys who write for the Internet treat the IMDB like it's the Wall Street Journal. I have news for you. It's not!

It's the Wikipedia of movies, you're saying?

Exactly. Anybody can write anything on there — half the shit on there is written by some 14-year-old in Tampa. That I've never met. No. I don't know. But anyway. All of us, Judd, me, Jody Hill — all of us working in comedy just respects what a comic can add to a movie and bring.

As someone who loves stand-up comedy as an art form, how do you approach the fact that there's two different audiences for comedy. There's one audience who loves Arrested Development and Eastbound and Down…

The comedy snobs, and then there's what the industry looks at as "the money audience."

I never think about it like that. I never consciously think about, who's, that specific of an audience. You're trying to make a movie that works for everybody in some respect. But at the same time you're trying to make a movie that you find funny, and then you hope that that's broad enough, that it connects. I think The Hangover really worked on the level it worked because, ultimately, people like to say it's raunchy, it's this, it's that, but really what it is is, there's a lot of heart to it, it feels real, and it puts you in a good mood. It's not mean-spirited in any way. Which I know sounds really simple. But a lot of R-rated comedies are R-rated because they're going to jam in nudity and jam in gross-out stuff. People like to often dismiss these movies, even dismiss The Hangover as that. But if you really look at it, it's really not that. It's R-rated because that's how 30-year-old guys in Vegas talk to each other. You don't have PG-13 conversations. But it's not R-rated because it's like mean-spirited, or just going for gross-out after gross-out.

Right. Right. Which, by the way, I loved, too. But that's a different thing.

But I guess, getting back to my question, though, knowing that there are two different audiences out there, doesn't the business make you think about that?

Again. I think the worst thing you can do, as a comic director, is make quote-unquote, a four-quadrant movie, which I think is what you're talking about. What I like to do is make a one-quadrant movie and then hope it connects with four quadrants for one reason or another, which is what The Hangover really did. For the same core audience who would go see Knocked Up or Old School or Wedding Crashers, those two especially were big movies, but then it ends up crossing over, women come, you know, younger people, older people, it just becomes a bigger thing. At your core, I think you're really aiming for what your audience is. This is a retarded conversation.

Which is why it'll be on the Internet. Do you feel like having the success of The Hangover allows you to get away with more for your next projects?

I don't know. I haven't thought about it like that. I definitely think there's a little more trust from the studio side that I could take advantage of, but it's not that I want to go out now and make a $100-million movie, because that's never been my thing. I like working within the confines of a budget, because it forces you to think of clever things in a different way than like, oh, just make it big. There's something very nice about having a limited amount of money, relatively speaking, and it just forces you to think in a different way.

What about in terms of developing yourself as a comedy brand? People in the past few years have thought of Judd that way.

Interview: First impressions with Noël Wells, from UT to UCB to SNL

2 thoughts on “Interview: Todd Phillips on “The Hangover” and the importance of casting actual comedians in movies”