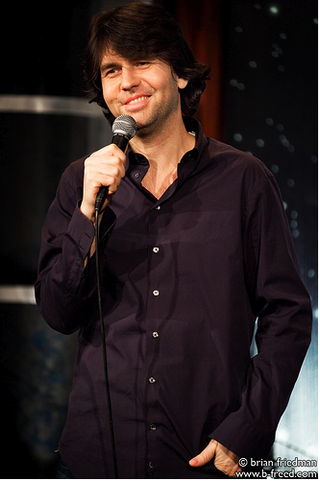 James Smith is one of my favorite people to talk comedy shop with, because he does not hold back his opinions about anybody. Why not get to know a little bit more about him. Before he was a comedian, Smith was a lawyer in Australia. Since moving here, he has appeared on Comedy Central's Live at Gotham, performed at Montreal's Just For Laughs, and even done a gig on the Mayercraft. Tonight, he headlines at Carolines as part of the club's weekly "Breakout Series."

When and where did you start performing comedy? I started performing at a venue in Sydney called the Comedy Cellar, which no longer exists. It was there for a very short time. And simultaneously, I began performing at the Sydney Comedy Store, which is very much still there, and is probably the premier club in Australia, and that is certainly where I made my bones, came up, as it were, at the Comedy Store.

Why did you pick NYC over LA or anywhere else? I chose New York City over Los Angeles, having always had a desire to live in New York, and, extremely intrigued by the excitement of, and the 24-hour schedule that it runs on, so yes, the excitement of New York. It being the city that never sleeps. That sort of drew me to New York. In terms of comedy, it would definitely be the stage time and the comedy scene. There's just ample stage time here. The comedy scene flourishes here. There's really an abundance of venues, and too, I think the crowds here are some of the best crowds in the world. They're extremely engaged in the shows and they give you a good verdict on whether or not your material is funny. And I think they're really truly prepared to listen to whatever ideas you might be exploring. So they're very much up for it, as we would say in Australia. They're up for it. Or a more sophisticated way to say that it is they're certainly prepared to be engaged by any ideas whatsoever, and you can literally say anything to a New York audience and they will generally at least hear you out. They might not laugh, and they might not support you, but they will at least let you have your say. And they're connoisseurs. They're really good crowds here. They're very good crowds. They're comedy fans. Comedy enthusiasts. So for those reasons: the stage time, the excitement, 24-hour lifestyle and the crowds that you get here, the fully-engaged crowds, they really are a good barometer, they give great feedback. For those reasons I chose New York City over Los Angeles.

How is this scene better/same/worse than the scene you moved from? Just different, and mainly different because of numbers. I would just say that the scene is much larger here. It's also an older art form here. They've had it for a longer time here than we had it in Australia. So it's different, but mainly due to population, because all of the same rules apply. All of the bad things about stand-up are the same, and all of the good things about stand-up are the same. Pretty much all of the same rules apply. It's just that there's a greater population so there's a greater demand and then there's more comics, so it's just on a macro level over here. That's the great distinction. And perhaps the history.

Do you already have an "only in New York City" moment yet? In terms of comedy, look, I think any time you do a show at 2 in the morning, where you get booked for a midnight show. Those are your only in New York City moments. Or when you can do eight spots in a night. Those are the only in NYC moments, because they are so incredibly unique to this city. Yeah, it's fun to see an enthusiastic crowd coming in at 12:45 at night. But probably mine, my only in New York City moment was a few years ago, when I remember one night, I can't remember the specific order. But I do remember Chris Rock coming into the Comedy Cellar, and I went on between him and Dave Chappelle. That, if nothing else, was not only an only in New York City moment, but that was probably an only once in a lifetime moment. It was incredible. I still, to this day, think that was a unique moment.
What tip would you give to any comedian who moves here? Just be prepared. It's all about preparation. It's all about preparing everything, from your strategic plan, whether it be financial, or timewise, or stage time, all of that is to be prepared, and to be resilient. Resilience is going to be your greatest friend.

Where do you see yourself five years from now? Five years from now, I would like to see myself realizing my potential. Which sounds very broad, but that's really where it's at for me and my stand-up. Especially with stand-up as an art form. Our heroes, the guys we love, the Izzards, the Seinfelds, the Rocks, those guys really do realize potential. So they take stand-up and they do absolutely everything they can with it until it's the best they can do. They get it to that level where essentially they can't do any more. That's the best product they can give you, and you know that when you watch their show. That's certainly how I feel with those three, and so that's what I'd like to be doing.

James Smith has a lot to say about marriage. Here's just a brief snippet of his philosophy, as captured on Live at Gotham. Roll it.