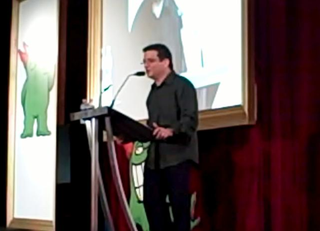 Some people worried that Andy Kindler's involvement with NBC's Last Comic Standing would mean that he'd pull his punches this summer in delivering his annual State of the Industry address at Montreal's Just For Laughs festival. Those people were worrying about the wrong thing. They should have worried that Kindler's involvement in the show may have distracted him and given him too much work, such that he somehow seemed to come to the address underprepared. More than a few of his barbs were in relation to things he acknowledged onstage that he hadn't even bothered to see.

There was a different feeling in the room this year, which was only half as full as it was in 2008, when comedians and industry folk packed the conference ballroom to standing-room-only capacity. Maybe half of the people felt they'd already heard enough real talk about the comedy industry the day before from Lewis Black? While Black prepared a thoughtful and blistering critique of the industry on the sixth floor of the Hyatt, two floors down in the big room, Kindler seemed even less focused than in recent years, going through his many pages of notes looking for his jokes. CORRECTION! I stand, or sit, corrected, as Kindler himself has reminded me that in 2008, the room filled up to capacity thanks to large round tables that were not present, which means the attendance may have been closer to the same (last year, he gave the speech on the sixth floor to a capacity crowd), and he has shuffled through his notes pretty much every year. Flawed questioning on my part! It still felt different this year.

But what about the jokes, you people who weren't in attendance may be wondering?

After an introduction from Harland Williams, Kindler started looking around the room, and noted that he thought he had Todd Barry open for him before "back in 1993, when he was even more low-key. A lot of people's careers have skyrocketed after introducing me." It looked as though this might start out more as a personalized roast — a la Jeffrey Ross Roasts Montreal, which was an actual show this year — than a speech on the state of the industry itself. "Do you have enough clients in your chair to accomodate your hip pocket?" he said to Dave Rath of Generate, seemingly talking to every single member in the audience in his opening.

He said he was fairly he will not be working with any of the people he will be slamming "so each year it's more dangerous what I'm doing…because I'm narrowing down the bridge that I am burning." So, in fact, he added: "This year most of the things I am making fun of I have not seen nor am I familar of."

"Most of the new comics are funny, and I do not like that. What am I going to do with that?" he asked. "I'm going to be on the Ones to Watch, the Seniors Tour."

He did take on The Office, thanks to Mindy Kaling's quote about polished jokes in the Variety article on Twitter. And Parks and Rec. "Can we all agree that Parks and Recreation is horrible?…Why wasn't it considered for an Emmy this year in the drama category?" He suggested that perhaps the show should not be improvised, and, taking on improv and yes and: "You know what you want in your comedy and your drama? You want agreement. You don't want conflict." "You know what I like to see, Mindy Kaling and BJ Novak, these comics who have really paid their dues in the trenches, these grizzled veterans…" but then he mocked TJ Miller in the second row for making out — before returning to Kaling's quotes in the Variety piece, in which she says Twitter should be like overheard conversations in a coffee shop, so he wrote that up…"How do you like your waffle? Is this where they shot Swingers?"

Taking on Robin Williams. Not Weapons of Mass Destruction. But 1982 material? Indeed. "He had a bit where Nixon was on the beach with a metal detector."

Would he keep talking about Last Comic Standing, we wondered? He would, but not before getting in a quick jab about comedy classes: "Either everyone I know here is going to Stand-Up Boot Camp or signing up for the next session." He said everyone is so serious about it, the craft of comedy. But about LCS, he acknowledged: "Do I think that Bob and Ross's shoes are pretty big to fill? Can I really follow that? Can I be as big as Ant? And will this hinder my impersonation of Jay Mohr? Can we attract back the Anthony Clark fans who have the show, thinking…I mean I think I loved the show, but I may have had a couple of notes. I think to think of myself as a kinder, gayer version of Simon Cowell." "I always underestimate how well I'm doing. That's my hook." "I remember the first Last Comic Standing in 1957 when Mort Sahl went up against Lenny Bruce in a game of Twister."

Kindler quickly touched on Mo'Nique, and his woes in hearing that the Academy Awards had given her an Oscar. Why did she need to be such a good actress? He figures this means he and you and me and we will all have to endure several Mo'Nique comedy specials now.

But what about Andy? What about his career? He said his manager told him he had an inquiry from Celebrity Fit Club. "Why don't you look on the bright side: They're implying your a celebrity."

On On Demand: "Spoiler Alert! Spoiler Alert! Grown-Ups. You're not going to enjoy it!"
"You're never going to see me on demand, demand, I want to see Old Dogs now!"

On The Today Show: "You know what I'd like to see in the morning, people desperately waving to their relatives, trying to make contact." on the Today show. Saw Tim Allen on the show, talking about his movie, Crazy on the Outside, telling people not to ad-lib, because he knew comedy and his dialogue was such gold.

He then held up an ad for Lopez Tonight with someone peeing their pants, and their pee makes the image of George Lopez show up. "He looks like if he had something funny to say…when you have that look on your face that you're ready to deliver a hard-hitting punchline, and then nothing."
"I have my own party going on in late night."
joking about playing Quad Cities, Iowa, pulls out the newspaper's section of what to do, and it had Dane Cook on the cover, but first, he mocked the newspaper's section title "Go and Do" — on Dane Cook, quoted; "all the credit goes to my technical crew" … "so if I want to do a subtle nuance" he notes that he said "if I want to do" not that he does "I'm more like creating a fake environment that I can thrive in." He then read a Hollywood Reporter about Cook's new movie role, in which he goes into "a rare non-comedy role."

"I think I might close with Leno stuff, so don't worry about it."

On Denis Leary: Why does Denis Leary voice ads? "Relax, pal! I was relaxed, Denis, before you started screaming in my face!"

On John Mayer: "We need to have more people who are hugely successful in other fields, to knock me back further"

On Mel Gibson: "I have watched Passion of the Christ so many times, just for the inside jokes." "There are so many roles Mel Gibson can still play. So many anti-Semetic roles he could play. He could play a racist. He could play a Nazi. You try to write a joke write before you give your speech."
"In the old days, I'd somewhat try to defend myself: Yeah, I saw it!"

On going for an audition for Marmaduke: "I asked what does Marmaduke sound like? They said it sounds like Seth Rogen….and then they cast Seth Rogen!"

Kindler slipped into Craig Shoemaker's "Lovemaster" voice in mocking radio DJ voices who promote listener events
"hey this one is from Lisa Lampanelli and it borders on racism, check it out"
"this one's from 1993, Wayne Cotter has a problem with the food choices on the airplane: Chicken, beef or fish."

On MacGruber: "If I don't like the sketch, will I have a problem with the movie? I know people don't agree with me on that."
"What will the next Saturday Night Live movie be? Fred Armisen starring in Bad Impression?"

On Leno: "What's it going to take to get people to stop watching Jay Leno?"
"Leno lost 10 pounds to prepare for primetime, because we all know that losing weight makes you funny. Look at what bodybuilding did for Joe Piscopo." And on his primetime show getting cancelled, in which NBC blamed it on the affiliates: "Oh, we get it, it's just the people who exhibit it who don't like it." On Leno not touching his Tonight Show money: "I spend all my money. Stop rubbing it in, Jay. We get it. You're rich!" He also lamented the demise of Leno's Green Car Challenge, noting that it sent celebrities on slow races around a small track. "I don't like it when Jay flirts. He has negative sexuality."

“All The Faces,” by Creed Bratton, as sung in NBC’s “The Office” finale

2 thoughts on “Andy Kindler’s State of the Industry 2010: Would you believe even less focused, Just For Laughs?”