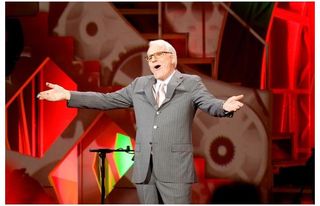 In its 28th year, the Just For Laughs comedy festival in Montreal has featured just about every big name in comedy. But Steve Martin, having "quit" stand-up comedy before JFL's debut, was not among them until last night, when he made his debut hosting two Gala-type showcases at the fest. (Photo by Montreal Gazette)

Word on the street has put forward the idea that Martin, now 64, may in fact be making a return to comedy. Though I couldn't talk to him personally to confirm or deny that word, I do know that on his current banjo and bluegrass tour with The Steep Canyon Rangers (who also accompanied him in Montreal), Martin has been making audiences laugh with his banter between songs. And Martin has plenty of experience as a host, doing so three times at the Academy Awards. He pulled it off quite nicely last night, as well. He told the audience that hosting brought forth a lot of responsibility to be funny. "But then I remembered that my friends John Cleese and Marty Short hosted last year, and I thought, well, I'm funnier than those idiots," he joked. Martin then acknowledged that he had finally come to Just For Laughs, which he called "comedy mecca. And we all know how funny Mecca is."

They played a highlight reel of Martin's greatest JFL moments, which, of course, amounted to footage from the first few minutes of the show, paused to allow latecomers to find their seats — at which point Martin cracked, "You would think in a place discovered by Cartier, they'd know how to get to places on time" — and Martin performed a custom tune with the band singing along called "Atheists Don't Have No Songs." Most Galas have goofy sketches for the host to perform, but Martin was not required to be wild or crazy on this evening. He did, however, play an audio recording of one of his phone calls to his wife, so as to make sure he wouldn't get the Mel Gibson treatment. And he closed out the night with a performance of "King Tut" (sans Egyptian outfit). 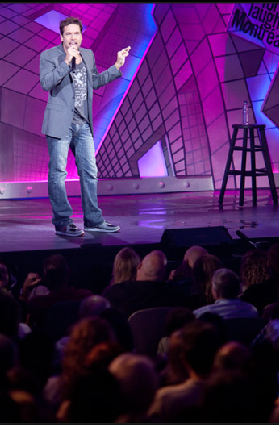 Oh, and there were plenty of stand-ups, too. The bookings were all over the map, and most certainly not hand-picked by Martin, with one notable exception. At the 10 p.m. show, Martin introduced Dane Cook as a "surprise guest." Cook told me he flew in just for this opportunity to perform for his comedy idol, arriving just in time for the late show, and departing this afternoon. At the showcase, Cook told the audience: "People say to me, Dane, why don't you come up and do the festival more often? Because the sets are fucking ugly!" (Photo by Tim Snow)

As for the rest of the 10 p.m. lineup: Godfrey kicked things off with a timely bit on the FIFA 2010 World Cup theme music and logo, and had the crowd rolling with his stories about playground equipment. Tom Wrigglesworth, who looks a lot like Will Franken with a Yorkshire accent, explained the difficulties of teaching his father how to use a computer. Todd Barry, who normally would joke about the fact that he went up too early in this show (and made that joke at the Alternative show), went with the other alternative and told bits you may have heard on his CD, "From Heaven." Andrew Maxwell joked about why Lebanese women are the most attractive, and why that is bad news for the women of Newfoundland. Maxwell also had some new topical material, notably about Paul the psychic octopus (who had a perfect record predicting World Cup games this summer) and the woman who got killed by the whale she trained at Sea World. When the crowd recoiled at that latter news, Maxwell acknowledged the weirdness in the room: "It stopped being a comedy show, it's turned into the afternoon shift at the old folks home." Mark Little, introduced by Martin as Halifax's favorite comedian, opened by noting that he almost got involved in a nerd riot when the film reel melted before the end of The Dark Knight. "The only thing that kept them from flipping cars was physical ability." Little also had winning bits involving sharks and soda pop, pronouncing punctuation, and getting tricked into nodding along to a racist. When he finished, he noted: "That's a little trick I call wait until they feel forced to applaud." Orny Adams was up next, and what can I possibly say to make you change whatever opinion you formed about him when you first saw Adams in Jerry Seinfeld's documentary, Comedian. It's been several years since then, and, well, Adams killed with closing bits about Propecia's bad side effects, and about OnStar getting you into trouble after a car accident. Whitney Cummings did a set similar to the one she performed at several other shows in Montreal this past week, opening with a bit bashing Cosmopolitan for its sex "advice" and also bashing men for being too obsessed with sports.

Didn't catch the 7 p.m. show, but the lineup was sure to have something to please (and displease) everyone: Gerry Dee, Jack Whitehall, Nick Cannon, Jarred Christmas, Steve Patterson, Rove McManus, Mike Birbiglia and Jo Koy.

Liz Meriwether on the Nick-Jess relationship from “New Girl,” before and after “the kiss”

What’s inside the mind of Mencia, anyhow?

2 thoughts on “More than Just a Gala: Steve Martin’s Just For Laughs Montreal debut, with a surprise guest”