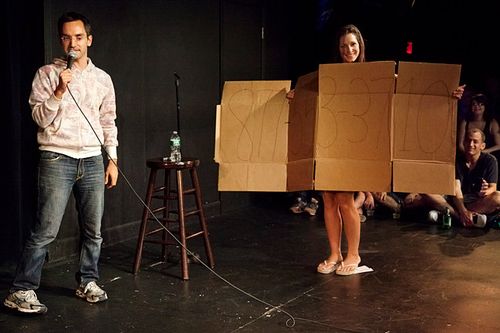 NBC's Last Comic Standing entered the voting phase on Monday night, and less than two hours after the episode had aired on the East Coast, finalist Myq Kaplan was onstage at the weekly Whiplash showcase at the UCB Theatre. Kaplan dedicated his set to getting out the vote for himself, getting an audience member to hold up a cardboard sign with his NBC phone number for this week written on it. He also told jokes, too, to make his case to this audience. Not sure if any of those jokes will make it onto primetime network TV next Monday, but Kaplan certainly hopes to have several more chances to do so. (Photo by Mindy Tucker)

One thought on “Pic of the Day: Myq Kaplan gets out the last-minute votes in running for Last Comic Standing”