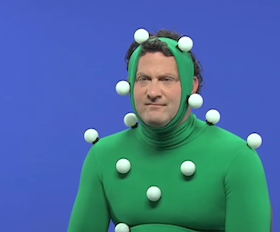 Michael Showalter had some issues with Michael Ian Black, and now he is moving on to the issue of TV advertising, launching a new web series exclusively on Babelgum called "The Making Of."

In four installments, Showalter will break down the creative process of your better-known commercials, such as this first episode, in which he shows us how Intel's "bah-buh-bah-bum" choir was drilled into precision. Maybe they should have watched Glee? Roll it. And no, I have no idea what's going on in this photo, but stay tuned and we'll all find out the answer in a future episode of…"The Making Of."

Just For Laughs announces JFL NorthWest fest in Vancouver; primetime special on The CW plus archived shows on CW Seed

Celebrity Autobiography is becoming a weekly series on My Damn Channel