Comedian/actor T.J. Miller came back to Chicago this week and brought some of his Windy City comedy friends back with him for a stand-up show billed as "Drinking Buddies," and the buddies certainly believed the drinking part was mandatory for the evening, in back-to-back shows that went well into Wednesday night at the Lincoln Lodge.

Host James Fritz complained early on that the Lincoln Lodge and JFL hadn't gotten with the program. "All they have for us backstage is water!" Fritz made do with the cash bar. 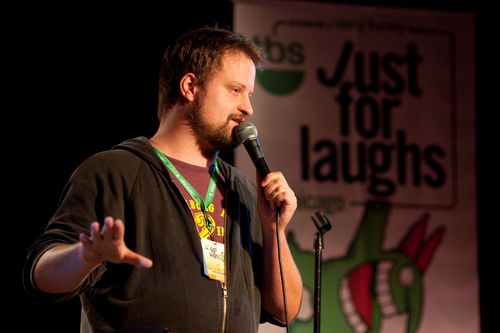 Mike Bridenstine (pictured) opened by commenting on Fritz and the fellow Chicago comedy scene and how gross they are. As for his drinking story, Brido shared that he had gotten drunk as a sixth-grader when his eighth-grade sister held a houseparty when their parents were away. "Aw, hell, no!" On a more sobering note, he also has written a great TV ad for a karate place that could join the pantheon of infamous local TV ads, whether in Chicago or anywhere.

Kyle Kinane was ready for "Showtime!" "I buy my beer in 12-packs so I'm not such a boozebag," Kinane claimed. "I like to get my exercise, so when I'm done, I can walk back and get more." He joked with the crowd about being so drunk, that he has pretended to take a cell phone call to mask his puking. But he's not built for drinking, apparently. "I'm not good at it," he joked. "But I keep coming back, because I think one of these nights, I'm going to figure it out. I'm like Rudy!"

Headliner Miller joked that his buddies may have taken the show's title a bit too literally by getting drunk before the show, although as he noted, with beer mugs as large as the ones the Lincoln Lodge sells, it's not that difficult. He said those mugs are big enough to expose your loneliness to the world. "Do you have another one that I can get into?" he asked. Miller also shared stories about filming the upcoming Yogi Bear movie, which he said is coming out in 3-D and features a song by Justin Timberlake. That prompted a reply from a female audience member in the back of the room. Only the Lincoln Lodge isn't that large. "Yes, ma'am, I am serious, and I can hear you when you say, 'Are you serious?'" Miller responded.