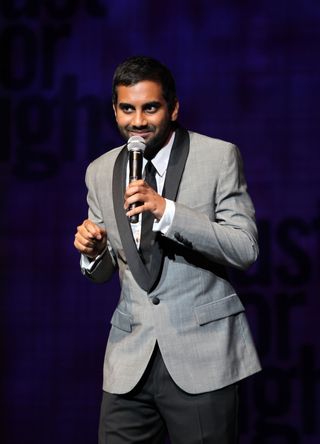 Remember all the way back to a year ago, when Funny People hadn't yet come out, but Aziz Ansari already was generating buzz for his caricature of a stand-up comedian called Raaaaaaaandy ("that's Randy with eight A's")? Fast-forward back to now, and Ansari — who just hosted the MTV Movie Awards and has several movie deals in the works in addition to his supporting role on NBC's Parks and Recreation — is a bonafide celebrity, getting name-dropped by people who he was name-dropping only a year ago.

Ansari packed the Vic Theatre in Chicago for four shows this week, two on Wednesday, two on Thursday. Watching the crowd go gaga for Ansari, and even more so for Raaaaaaaandy, it has become increasingly clear that his hopping, singing overconfident character isn't all that different from the Ansari who earlier in his act, ends a series of tags about a racist locksmith with a jingle, or comes up with new song-raps for R. Kelly as an online dictionary resource. It's just that now, Ansari closes his 45-minute set, then after briefly leaving the stage, returns to welcome Raaaaaaaandy as his "special guest" to wild applause and audience suggestions for his blowjob jokes.

That's not to say Ansari doesn't still want to be known as a more reserved, less confident type. When he told the Vic audience on Wednesday, "I'm single now," and multiple women shrieked in delight, Ansari replied: "Aw, you don't mean that." Except they do. Aziz Ansari is a celebrity now.

The messy 2010 Streamy Awards, and what they say about how we watch the WWW now

One thought on “A star is born: Aziz Ansari is famous enough now that Randy isn’t just a character, it’s his closer”